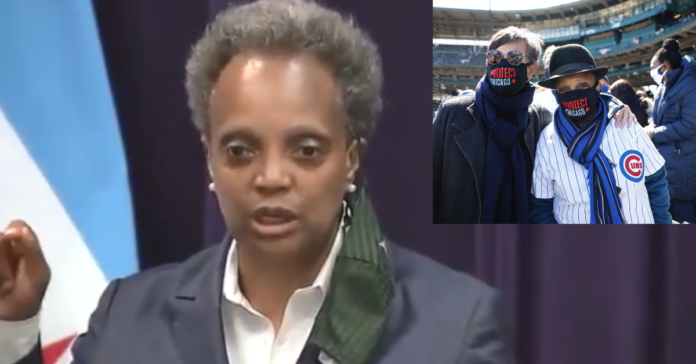 Chicago Mayor Lori Lightfoot went out to meet the public and quickly learned she should have stayed at home. Lightfoot bungled the protests and the riots and then fumbled the pandemic while at the same time adding more red light and speed camera traps annoying the residents.

She may not want to admit that she is on track to be a one-term mayor but after she got booed at a Chicago Cubs game the reality is sinking in for the embattled mayor. (See video below)

Lori went to a Cubs game and tweeted out: “I’m thrilled for the return of baseball & fans in the stands—but the pandemic isn’t over. As exciting as this is, (and Dr. Arwady & Dr. Ezike would agree) masking & physical distancing is still critical. Let’s play ball (with CDC requirements in mind).”

Not so fast said Chicago Cubs fans who booed her when she was introduced.

The Chicago Democrat has been widely criticized over her strict coronavirus lockdown orders, and at one point, she instructed residents to report business owners who were not abiding by her directives.

In April of last year, Lightfoot was spotted getting her hair done at a salon in direct defiance of her state’s own coronavirus restrictions. The mayor justified the decision by explaining that she was the face of the city.

“I’m the public face of this city. I’m on national media, and I’m out in the public eye,” Lightfoot said in response to accusations of hypocrisy. “I take my personal hygiene very seriously. As I said, I felt like I needed to have a haircut.”

There are audible boos when Chicago mayor Lori Lightfoot is introduced before the Cubs game.

Mayor Lori Lightfoot gets a big round of boos from fans here at Wrigley Field.