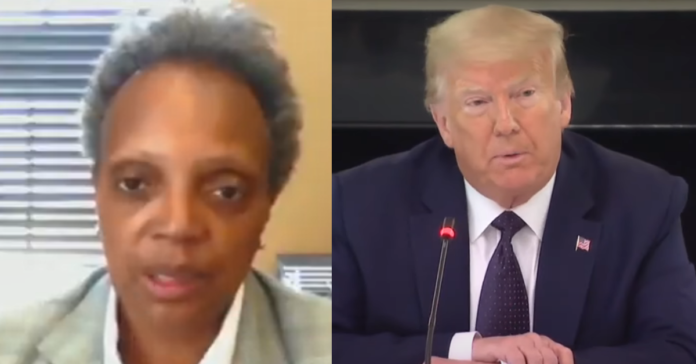 Chicago Mayor Lori Lightfoot (D) said, with a straight face mind you, that President Trump is to blame for the gun violence in Chicago because he hasn’t pushed gun reform through the Congress.

Trump ripped into Lightfoot the other day comparing Chicago to Afghanistan so Lori went after him today on NBC. (Watch the video below)

“We’re doing an all-hands-on-deck strategy, we’re really focusing on the root causes of the violence, but fundamentally we have too many illegal guns on our street and that is a direct result of a failure of federal leadership,” Lightfoot said Tuesday in an interview with MSNBC.

“Which is why we need change in November and we need the kind of leadership that Joe Biden is going to bring to our country.”

During a law enforcement round table on Monday, Trump said Chicago’s gun violence was worse than “any war zone that we’re in.”

“When you have 20 people killed, 22 people killed in one weekend in Chicago, and you have 88 shootings — it’s not even conceivable. That’s worse than Afghanistan. I hate to say it: That’s worse than any war zone that we’re in, by a lot.  It makes them look like tame places by comparison.  So we’re not going to let it go on,” Trump said.

Trump’s roundtable comments followed a letter he sent to Lightfoot and Illinois Gov. J.B. Pritzker (D) last month in which he accused the Democrats of failing the city amid a string of violent incidents in Chicago.

“If you go back over many years President Trump has said a lot of disparaging things about the city of Chicago. He likes to use us as a political punching bag,” Lightfoot said. “But if the president was really committed to helping us deal with our violence he would do some easy things.”

“This is the kind of thing that federal leadership could do, but as long as we are challenged with having states surrounding us, notably Indiana that has very lax gun laws, where somebody can drive across the border and literally load up a vehicle with military grade weapons and bring them back to the city of Chicago, we’re going to continue to be challenged,” the mayor said.

“If the president was really committed to helping us deal with our violence, he would do some easy things … He would push to make sure that people who were banned from getting on airplanes can’t get guns." pic.twitter.com/2S0idD0yQd