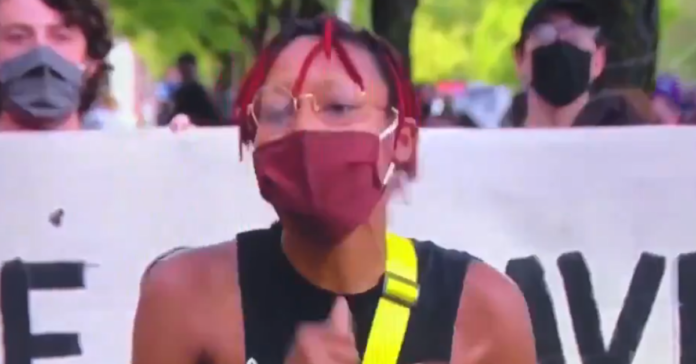 “I don’t care if someone decides to loot a Gucci or a Macy’s or a Nike store, because that makes sure that person eats,” said Ariel Atkins, a BLM organizer in the video below.

“That makes sure that person has clothes. That is reparations,” Atkins added. “Anything they wanted to take, they can take it because these businesses have insurance.”

BLM leaders also gave a statement to the Chicago Sun-Times:

“The mayor clearly has not learned anything since May, and she would be wise to understand that the people will keep rising up until the Chicago Police Department is abolished and our Black communities are fully invested in.

Over the past few months, too many people — disproportionately Black and Brown — have lost their jobs, lost their income, lost their homes, and lost their lives as the city has done nothing and the Chicago elite have profited.

When protesters attack high-end retail stores that are owned by the wealthy and service the wealthy, that is not ‘our’ city and has never been meant for us.”

Chicago police believe the looting began after officers shot a man in the city’s Englewood neighborhood on Sunday afternoon. Authorities say the man, identified as 20-year-old Latrell Allen, had a gun and fired at police before they returned fire, striking and wounding him.

BLM organizers are criticizing the police narrative surrounding the shooting, pointing out that none of the officers involved in the shooting had body cameras.

Investigators confirmed the lack of body cameras Monday, and are asking the public for help in tracking down witness video of the incident.

Even still, Atkins and other organizers say that the entire incident points to deep-seeded issues that remain within the Chicago Police Department.

“Even though the Department of Justice said with the consent decree they are no longer allowed to chase people, they decided they were going to chase, and they shot this young man multiple times,” Atkins said.