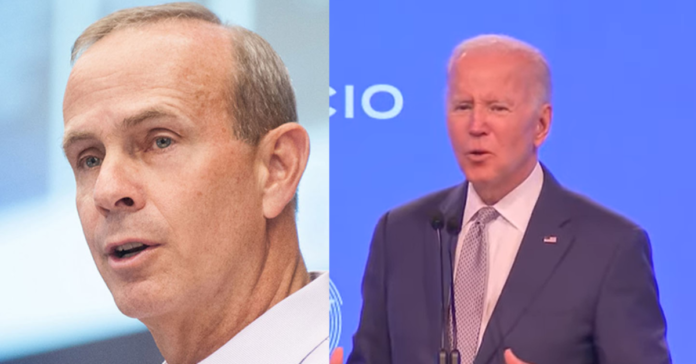 Chevron’s CEO Michael Wirth put President Joe Biden in his place in a letter he sent to the White House that included some good advice on how to lower gas prices. Wirth wrote:

“Thank you for your letter dated June 14, 2022. As industry leaders, academic experts and numerous policy makers have pointed out, there are no easy fixes nor any short-term answers to the global supply and demand imbalances aggravated by Russia’s invasion of Ukraine.

“Addressing this situation requires thoughtful action and a willingness to work together, not political rhetoric. I look forward to meeting with Secretary Granholm and am hopeful for a constructive conversation about actions to address both near-term issues and the longer-term stability of energy markets.

“In the Permian Basin alone, we expect production to approach 750,000 barrels per day by the end of the year, an increase of more than 15 percent from 2021. And Chevron’s U.S. refinery input grew to 915,000 barrels per day on average in the first quarter of this year from 881,000 in the same quarter last year.

In addition to increasing American oil and gas production, Chevron is also investing $10 billion to reduce greenhouse gas emissions and scale new advanced energy technologies, like carbon capture and hydrogen, along with growing our renewable liquid fuels production capacity to 100,000 barrels/day by 2030.

“America will lead in these critical new industries, creating jobs at home and exporting them to the world to meet energy and climate objectives.

“Increasing American production will offset barrels produced in other parts of the world that may not support America’s energy security, economic competitiveness, or environmental goals.

“I want to be clear that Chevron shares your concerns over the higher prices that Americans are experiencing.

“And I assure you that Chevron is doing its part to help address these challenges by increasing capital expenditures to $18 billion in 2022, more than 50% higher than last year.

Chevron and its 37,000 employees work every day to help provide the world with the energy it demands and to lift up the lives of billions of people who rely on these supplies.

“Notwithstanding these efforts, your Administration has largely sought to criticize, and at times vilify, our industry. These actions are not beneficial to meeting the challenges we face and are not what the American people deserve.

“While today’s geopolitical situation is contributing to this energy crisis, bringing prices down and increasing supply will require a change in approach. You have called on our industry to increase energy production.

“We agree. Let’s work together. The U.S. energy sector needs cooperation and support from your Administration for our country to return to a path toward greater energy security, economic prosperity, and environmental protection.

“We need clarity and consistency on policy matters ranging from leases and permits on federal lands, to the ability to permit and build critical infrastructure, to the proper role of regulation that considers both costs and benefits. Many of these elements are described in our industry’s recently released 10-point plan.

“Most importantly, we need an honest dialogue on how to best balance energy, economic, and environmental objectives – one that recognizes our industry is a vital sector of the U.S. economy and is essential to our national security.

“We can only meet these challenges by working together. Chevron will engage in this week’s meeting with Secretary Granholm. I encourage you to also send your senior advisors to this meeting, so they too can engage in a robust conversation.

“Your “whole of government” philosophy in addressing major issues should apply here too, as a comprehensive approach is best to address the energy needs of our nation and of our allies.

“The American people rightly expect our country’s leaders and industry to address the challenges they are facing in a serious and resolute manner. We are a willing partner in that endeavor and trust your Administration will be the same,” he wrote.

“He’s mildly sensitive. I didn’t know they’d get their feelings hurt that quickly.

“Look, we need more refining capacity. This idea that they don’t have oil to drill and to bring up is simply not true.”