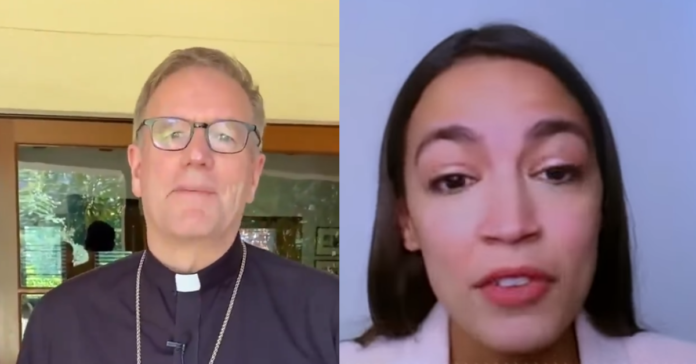 Rep. Alexandria Ocasio-Cortez (D-N.Y.) went too far for a Catholic Bishop when she called the statue in the US capitol building of Father Damien, a canonized saint in the Catholic Church who dedicated his life to helping lepers, part of “white supremacist culture.”

She said, “Even when we select figures to tell the stories of colonized places, it is the colonizers and settlers whose stories are told — and virtually no one else. Check out Hawaii’s statue.

It’s not Queen Lili’uokalani of Hawaii, the only Queen Regnant of Hawaii, who is immortalized and whose story is told. It is Father Damien. This isn’t to litigate each and every individual statue, but to point out the patterns that have emerged among the totality of them in who we are taught to deify in our nation’s Capitol: virtually all men, all white, and mostly both.”

“To associate this man, in any way, with colonialism or white supremacy is so ridiculous and insulting, and it shows the superficiality and the simplistic quality of these sort of woke categories,” Barron said.

He continued, “I can’t help but think: Of all the people that could have been singled out … what is it with this attack on Catholic saints?!”

Barron went on to highlight that a statue of Jefferson Davis, the president of the Confederacy, remains in Statutory Hall in the U.S. Capitol — but Ocasio-Cortez still chose to target the statue of Damien.

“It’s time to get beyond these simplistic categories,” Barron suggested.

Friends, I made this quick video in response to @AOC. In defense of St. Damien of Molokai: Part 1 pic.twitter.com/Wj92fPBxbs

In defense of St. Damien of Molokai: Part 2 pic.twitter.com/YYIFZU2DV4

Friends, ever since I was a young man and throughout my academic career, my touchstone has always been Aquinas.

I hold to an "open Thomism," one that welcomes Augustine, Bonaventure, and contemporary thinkers like Newman and Ratzinger.