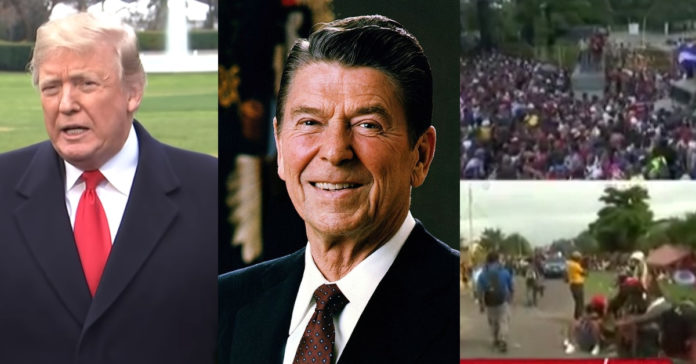 The migrant caravan just let the cat out of the bag and exposed themselves as rank opportunists. Who certainly know a lot about our laws and history to make one wonder if they are not getting coached.

We do know they sued Trump’s administration in American courts and that ain’t cheap so they are being helped.

This latest affront to American dignity should be met with swift action because the migrants are now demanding $50,000 in reparations for what Ronald Reagan allegedly did in central America.

Look, America is the most generous nation in history and we give aid and we help militarily when democracy is threatened. As it was during the communist insurrections in this region – look at Colombia with FARC and Venezuela today to know what was at stake.

To ask for reparations for saving an entire region, while we also give billions in aid is the last straw – send them home with nothing Trump.

From Fox News: Two groups of Central American migrants marched to the U.S. Consulate in Tijuana on Tuesday with a list of demands, with one group delivering an ultimatum to the Trump administration: either let them in the U.S. or pay them $50,000 each to go home, a report said.

Among other demands were that deportations be halted and that asylum seekers be processed faster and in greater numbers, the San Diego Union-Tribune reported.

The first group of caravan members, which included about 100 migrants, arrived at the consulate around 11 a.m. Alfonso Guerreo Ulloa, an organizer from Honduras, said the $50,000 figure was chosen as a group.

“It may seem like a lot of money to you,” Ulloa told the paper. “But it is a small sum compared to everything the United States has stolen from Honduras.”

From the San Diego Tribune: On the one-month anniversary of their arrival into Tijuana, caravan members are pressing the United States to take action but they are dwindling in numbers since more than 6,000 first arrived to the city’s shelters.

Approximately 700 have voluntarily returned to their country of origin, 300 have been deported, and 2,500 have applied for humanitarian visas in Mexico, according to Xochtil Castillo, a caravan member who met with Mexican officials Tuesday. The group of unaccounted migrants, about 3,500 are presumed to have either crossed illegally into the United States, moved to other Mexican border cities, or simply fallen through the cracks.

Mexico’s National Institution of Migration did not respond to a request to verify those numbers Tuesday.

The first group demanding action, numbering about 100, arrived at the U.S. Consulate at about 11 am Tuesday. The migrants said they were asking that the Trump Administration pay them $50,000 each or allow them into the U.S.

When asked how the group came up with the $50,000 figure, organizer Alfonso Guerrero Ulloa of Honduras, said they chose that number as a group.

“It may seem like a lot of money to you,” Ulloa said. “But it is a small sum compared to everything the United States has stolen from Honduras.”

The group’s letter criticized American intervention in Central America. They gave the U.S. Consulate 72 hours to respond. They said they had not decided what to do if their demands were not met.

“I don’t know, we will decide as a group,” Ulloa said.

The second letter, delivered around 1:20 p.m., came from a separate group of caravan members asking for the U.S. to speed up the asylum process. Specifically, the group asked U.S. immigration officials to admit up to 300 asylum seekers at the San Ysidro Port of Entry each day.