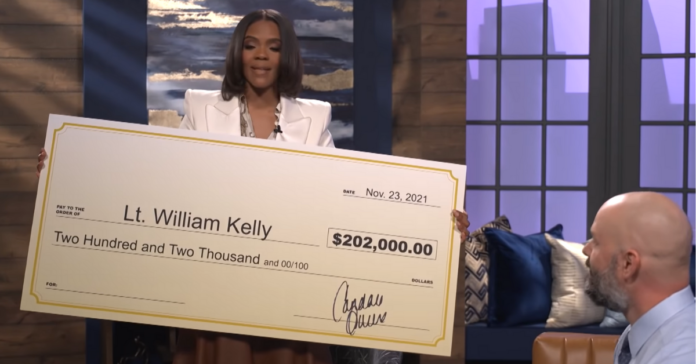 Candace Owens joined the growing chorus demanding the Virginia police officer fired for his support of Kyle Rittenhouse get his job back. But Candace did more than voice her support, she raised a bunch of money to help his cause.

Owens gave Lt. William Kelly a sweepstakes-sized check for $202,000 on her show although as she told him the real number is close to $240,000. Kelly anonymously donated $25 to Kyle Rittenhouse’s defense fund but was doxxed by some hacker. Normally no one would care, but the media dishonesty poisoned the nation and Kelly was let go.

Kelly is a 19-year veteran of the Norfolk Police Department in Norfolk, Virginia. He was close to having his pension vest when he was fired.

Jonathan Turley says it is time to give officer Kelly his job back and he makes a very compelling case.  Turley points out that Kamala Harris donated to a fund to pay the bail of the Minnesota protesters so it is a farce that Kelly has not been reinstated. Turley wrote:

“Various public officials, including Vice President Kamala Harris, have contributed to the The Minnesota Freedom Fund, which “pays criminal bail and immigration bonds for those who cannot otherwise afford to as we seek to end discriminatory, coercive, and oppressive jailing.”

“The vice president and others have the right to support such legal defense funds, which aim to ensure litigants have the means to defend themselves. So does Kelly.

“When Kelly was fired, many on the left celebrated despite the fact that he was being denied his right to free speech and free association.

“It is a pattern I have written about in the past as public employees are fired for statements on social media or associations in their private lives.

“As it stands, Kelly was fired for supporting (again, anonymously) a teenager who was ultimately acquitted of all charges by a jury. He was fired for contributing to a legal fund that would help the accused put on a full defense. That is in the interest of justice.

“Yet, Filer and Boone remain employed despite using their official positions to retaliate against a public employee using his constitutional right to free speech. Kelly and his family continue to appeal his firing as they struggle to survive on the teacher’s salary of his wife.

“The dictator Idi Amin once proclaimed “There is freedom of speech, but I cannot guarantee freedom after speech.” That seems the standard applied in Norfolk where even anonymous support for a legal defense is grounds for termination,” he wrote.

…Kelly was fired for simply donating to the Rittenhouse defense fund and writing a supportive note as a private citizen. The only thing more shocking than Kelly’s loss of his job is that Norfolk City Manager Chip Filer and Police Chief Larry Boone have retained theirs.