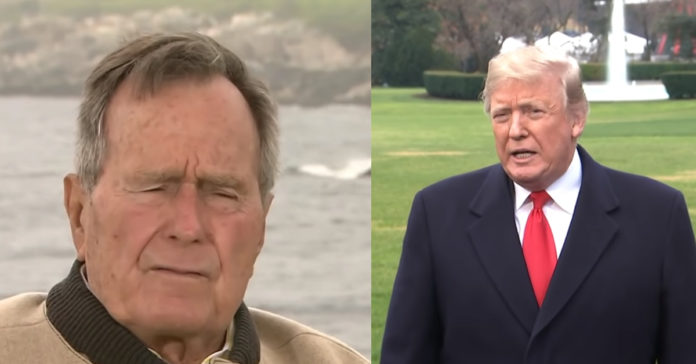 John McCain’s funeral was full of swipes and snipes and outright attacks against President Trump. He knew it was coming and he didn’t go thankfully because it could have got ugly.

With the sad passing of American hero George H.W. Bush, America was expected to see another spectacle full of establishment anti-Trump sentiment.

Trump’s no fool and while he wanted to pay his respects if anyone thought he would sit there and just listen to all the failed luminaries of the establishment bash him, they haven’t been paying attention.

So the Bush’s were faced with a choice, and true to character they made the correct and very classy decision to outlaw Trump bashing and focus on the passing of an America hero.

From Fox News: The Bush family has taken great care to assure that services being held to honor the life and legacy of former President George H.W. Bush do not become a political platform for anti-Trump swipes.

Such rhetoric was prominent in services for the late Sen. John McCain three months ago.

The family already contacted the White House this past summer saying that President Trump would be welcome at H.W. Bush’s services — and assured Trump that the focus would be on the 41st U.S. president’s life rather than their disagreements, The Washington Post reported, citing a former administration official.

While Trump and the Bush family have had their differences, the White House has sought to honor the 41st president’s legacy. Trump and first lady Melania Trump paid their respects at the Capitol Monday night.

A person close to the funeral preparations told The Post that the tone of Wednesday’s funeral at the Washington National Cathedral will reflect the sense of propriety of Bush, who “wouldn’t want anyone there to feel uncomfortable, including the incumbent president.”

“If anybody at any time knew anything about the 41st president of the United States, they would completely and totally understand that he would welcome the current occupant 100 percent,” an aide in the office of the former president told the publication. “This is the way the country says goodbye to presidents.”