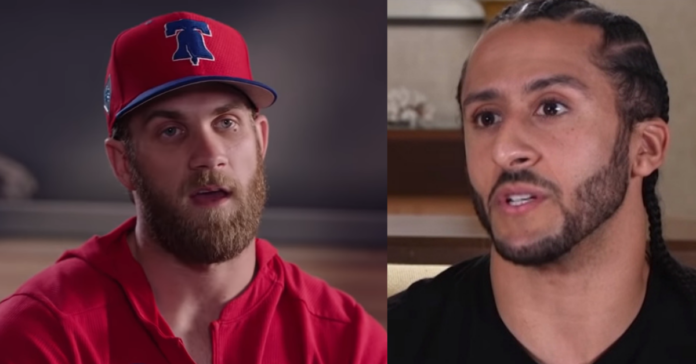 Colin Kaepernick caused another firestorm by getting Nike’s new ‘Betsy Ross” cleats pulled. Colin had objections to the cleats, but not to the city of San Francisco which flew the flag for the entire time Colin played for the SF 49ers.

Colin also didn’t have an issue when Barack Obama flew the Betsy Ross flag during his second inauguration.

Bryce Harper wasn’t pleased and trolled Colin during his 4th of July game. Check out the pictures of his Betsy Ross cleats below.

From Big League Politics: Somehow, the original American flag has become a topic of contention in American political life, with major Presidential candidates comparing it to a racist and white nationalist symbol.

The ‘Betsy Ross’ flag representing the original 13 colonies in North America was shelved from a Nike shoe design, who caved to politically correct and anti-American pressure in removing an original American flag-themed shoe product.

The leftist company faced a swift backlash, with the state of Arizona canceling a planned tax subsidy deal to create a Nike shoe plant in the city of Goodyear.

Philadelphia Phillies all-star slugger and outfielder Bryce Harper isn’t having any of it, and broke out a pair of patriotic cleats honoring the flag in the July 4th game against the Atlanta Braves.

The potential hall-of-famer has broke out patriotic cleats for the Fourth of July before, busting out military-themed athletic shoes in 2016 that featured the insignia of the Army, Marine Corps, Air Force, Navy and Coast Guard.

Harper put the cleats to good use in the Atlanta night game, raking in two hits and and RBI.