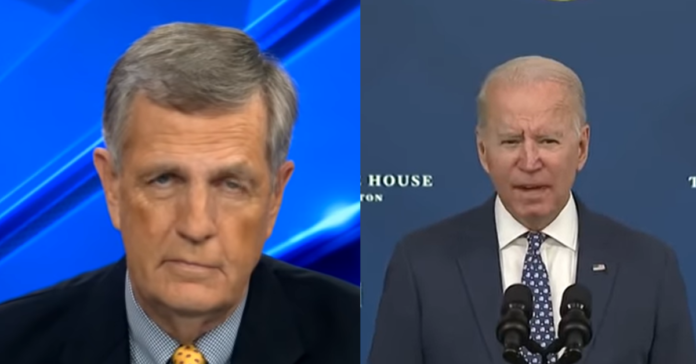 Brit Hume went on Fox News with Bret Baier to discuss President Joe Biden’s rather weak attempt to fend off Dem rivals and delay the inevitable, officially being named a lame duck, by saying he will run again in 2024.

“I don’t think it’s at all clear that he intends to run again, but I do think as a political matter, you have to say that,” Hume said before reminding the viewers that as soon as Biden says he is not running he is a lame duck “and lame duck presidents don’t do well.”

Hume also said he is not certain Biden will run again or will “be in any condition to.” Hume went even farther and said he doesn’t think Joe Biden will even finish his one term. He said:

“In fact, I think the thing we have to watch is the question of whether he serves out his first term. He’s clearly deteriorating, he’s clearly senile.

“And his health is, despite his doctor’s claims to the contrary, you know, when you’re falling downstairs and so on, as he did climbing the stairs to Air Force One, that’s worrisome.

Trey Gowdy chimed in telling Baier, “I have no idea about the president’s cognitive abilities. That’s not my background.”

“He’s always had an affected manner of speech for 25 years,” Gowdy said..

Trey then issued a warning to Biden, who most believe, especially ambitious young Dems, that he is weak and ripe for a real challenge.

Trey said “a lot of ambitious young Democrats” would most likely see the writing on the wall and run against him.

Hume ripped Biden earlier on inflation saying: “It looks to me as if this is an administration that was willing to sacrifice a lot on the altar of moving away from carbon-based fuels.

“And, you know, gasoline, obviously oil, coal, natural gas, all those in the interest of trying to save the planet. And they seem perfectly prepared to let consumers pay higher prices, perhaps ever-higher prices toward that end.

“And the consequence of that, I think, is, politically, even if inflation in other areas of the economy subsides, if people are still paying these sky-high, gasoline prices and other fuel prices, the feeling is going to be that this administration brought us inflation and it’s here to stay. Not good politically.

“Inflation is really a dangerous thing because whatever other gains are made in wages and so forth are wiped out by inflation and it damages your savings.

“As long as the Fed, if interest rates are low, it’s going to be hard for people who have savings to make the kind of gains that they want and need.

“It is about as corrosive a factor in American life as one can imagine, and it has remained at bay for many years now. And here it’s back. And the Fed keeps telling us, no, this is transitory, and maybe it is.

“But if this administration is going to have an anti-fossil fuels policy that continues to drive energy prices ever higher, they’re not going to be to convince people that inflation is under control.

“This is kind of politically insane to let this go on. And to shut down pipelines and not approve pipelines and end up begging Saudi Arabia to increase its production to offset the loss of energy here at home, I think is not going to sit well with the public. No question about it,” he said.

Another big story, another disgraceful performance by major organs of the news media. They don't learn, they don't stop, and they apparently don't care. https://t.co/2rHARcZDsQ