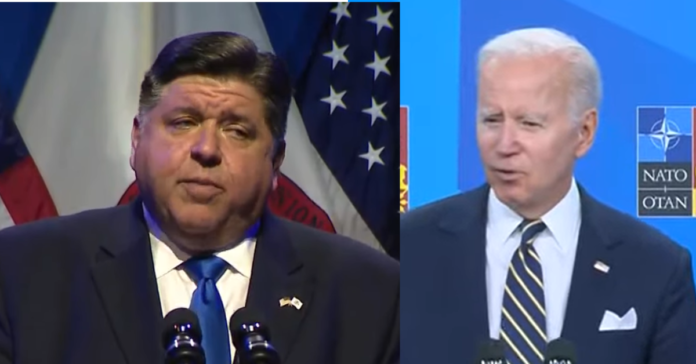 Democratic Governor from Illinois J.B. Pritzker put President Joe Biden on notice during an interview with NBC News saying “it’s certainly possible” that Biden could face a primary challenge if he runs for re-election in 2024.

Pritzker is a billionaire who has been rumored to be weighing a campaign for the presidency in 2024. And, mostly because of Joe Biden’s weakness and unpopularity, Pritzker is not hiding it. He was just in New Hampshire to give a big speech to help the campaigns of Sen. Maggie Hassan and governor candidate Tom Sherman.

Biden is toxic so no Dem wants to be seen with him. And as every politician knows, New Hampshire is an early primary state and critical to win if you want to be President. Pritzker going to New Hampshire now is not an accident and Joe Biden should be worried.

Pritzker said of Biden getting primaried:

“That’s not something I’m encouraging, but it’s certainly possible. We’ve seen it in the past.

NEW: JB Pritzker, who has fueled speculation about his own White House ambitions with a visit to New Hampshire, tells me it’s ‘certainly possible’ that President Joe Biden faces a primary if he runs for re-election. (He says he’s not encouraging it).
https://t.co/RyMcspBOBA

“For me, I’m focused on my re-election and what it is I can do for the people of Illinois,” he said.

New Hampshire Democrats zeroed in on abortion rights during their annual convention here Saturday, bringing in Illinois Gov. JB Pritzker to prop up the campaigns of Sen. Maggie Hassan and governor candidate Tom Sherman, who will likely ease through September’s primary but face tough races heading into November’s general election.

“The Republican Party is so afraid of the power and influence women have achieved in our society that they are seeking to shame and criminalize your very autonomy,” said Pritzker, who leads a state that has a law that codifies Roe v. Wade.

It’s a subject that generated the most applause throughout the day, including during a speech by Marty Walsh, Secretary of Labor and the former mayor of Boston (Massachusetts also has codified Roe).

For the record, Walsh told the crowd, he’s not running for president.

Pritzker’s name, on the other hand, has popped up repeatedly as a potential future presidential candidate, most recently when it was announced he’d be speaking Saturday in New Hampshire.

But the Democratic governor’s political team says Pritzker is only focused on his reelection and on helping elect Democrats across the country who support abortion rights.

The Illinois governor’s rallying cry for defeating Republicans caught the attention of Democrats in the Granite State, where presidential candidates have flocked over the years to introduce themselves.

Illinois is not going back on a woman's right to choose.

As long as I'm governor, abortion will remain safe and legal. Because in this state, we trust women. pic.twitter.com/JfRyL64w8H