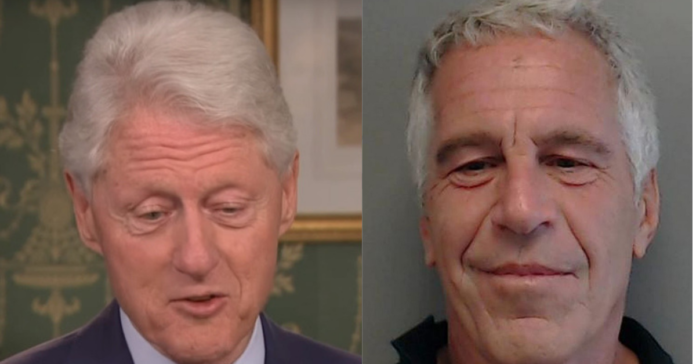 Florida billionaire Jeffrey Epstein was arrested on Saturday in New York. He was charged with sex trafficking of minors.

Some of his employees who helped with the scheme seemed to have flipped and are helping the prosecution.

He is looking at around 40 years in prison which is a life sentence for a man in his late 60’s.

Now, Epstein had many powerful friends and they are all terrified right now. On both sides of the aisle. None more terrified than Bill Clinton.

Bill, as Fox News reminds, flew many times on Jeff’s jet dubbed the Lolita Express. He apparently ditched his secret service detail on at least 5 of these trips.

From Fox News: Former President Bill Clinton was a much more frequent flyer on a registered sex offender’s infamous jet than previously reported, with flight logs showing the former president taking at least 26 trips aboard the “Lolita Express” — even apparently ditching his Secret Service detail for at least five of the flights, according to records obtained by FoxNews.com.

Clinton’s presence aboard Jeffrey Epstein’s Boeing 727 on 11 occasions has been reported, but flight logs show the number is more than double that, and trips between 2001 and 2003 included extended junkets around the world with Epstein and fellow passengers identified on manifests by their initials or first names, including “Tatiana.”

The tricked-out jet earned its Nabakov-inspired nickname because it was reportedly outfitted with a bed where passengers had group sex with young girls.

“Bill Clinton … associated with a man like Jeffrey Epstein, who everyone in New York, certainly within his inner circles, knew was a pedophile,” said Conchita Sarnoff, of the Washington, D.C. based non-profit Alliance to Rescue Victims of Trafficking, and author of a book on the Epstein case called “TrafficKing.” “Why would a former president associate with a man like that?”

Update: Bill Clinton has just responded and denied the Fox News report. Bill said he was only on the jet 4 times and secret service was always present.