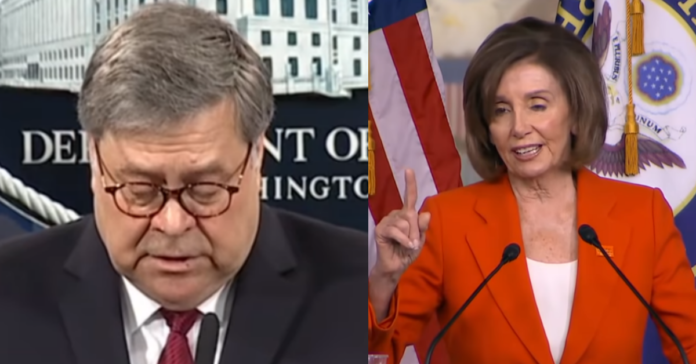 Bill Barr is done messing around with the rudderless Democrats. The left is in disarray and has no idea what to do.

Some Dems want to impeach Trump and lose in the Senate, if not lose in the House, in the process.

Others know that this drastic course of action would sink their chances of beating Trump in 2020 to say nothing of the House and the Senate and prefer the cautious approach.

So off they go, disjointed, with no clear goal, other than to create as many public spectacles as they can to try to damage Trump politically.

Bill Barr, for one, sees through them. From The AP:

Attorney General William Barr on Monday accused Democrats of trying to create a “public spectacle” by subpoenaing Special Counsel Robert Mueller to testify before Congress about the Russia investigation.

There’s no indication that Mueller does not wish to appear before Congress on July 17. But he put lawmakers on notice that any testimony he gives will not go beyond his 448-page report that was released in April. At a news conference in May, Mueller said the team chose the words in the report carefully and that the work speaks for itself.

“I’m not sure what purpose is served by dragging him up there and trying to grill him,” Barr said. “I don’t think Mueller should be treated that way or subject himself to that, if he doesn’t want to.”

Mueller no longer works for the Justice Department, but the department could attempt to limit his testimony about decisions he made as special counsel.

Barr spoke to the AP Monday in South Carolina, where he visited a prison to discuss the criminal justice reform Trump signed into law last year.

Democrats have criticized Barr, saying he acts more like the president’s personal lawyer than the attorney general. Barr enthusiastically embraced Trump’s political agenda, cast Mueller’s report as a vindication for the president and launched an investigation into the origins of the probe — something Trump has repeatedly said should happen.

Barr said the investigation is ongoing and said, from what he’s seen so far, it is “essential to take a deeper look at how things unfolded.” He said he has not received a satisfactory answer about why a counterintelligence investigation was opened on the Trump campaign, or whether there would’ve been a less drastic measure that could’ve been taken at the time.