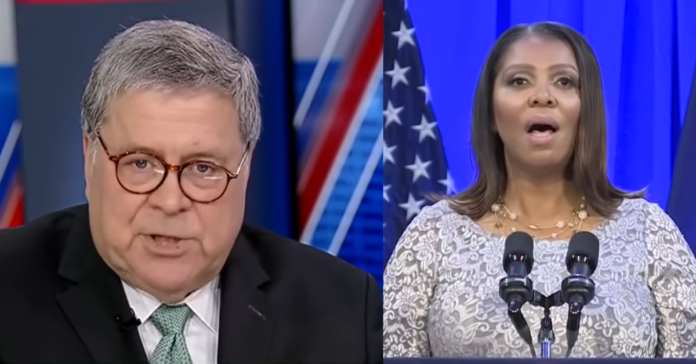 Barr said, “It’s hard for me not to conclude it’s a political hit job. This is a woman who campaigned for office promising she was going to go after Trump, which I think is a tremendous abuse of office to go headhunting and targeting individuals. So I think she was targeting Trump.

“This is after three years a civil lawsuit, the gist of which is when the Trump organization borrowed money, Trump personally guaranteed those loans, and to support that, she’s claiming that he inflated his assets on his financial statements.

“I’m not even sure she has a good case against Trump himself, but what ultimately persuades me that this is a political hit job is she grossly overreaches when she tries to drag the children into this.

“Yes, they had roles in the business, but this was his personal financial statement.

“It was prepared by the CFO, accounting firms were involved in it.

“The children aren’t going to know the details of that, nor are they expected in the real world to do their own due diligence and have it reviewed independently.

“This to me looks like gross overreach, which I think is going to end up backfiring on them.

“I think it will make people sympathetic for Trump.

“This is another example of people piling on because of Trump derangement syndrome, you know, this strong entire to punish him.”

“Trump falsely inflated his net worth by billions of dollars,”

“For too long, powerful, wealthy people in this country have operated as if the rules do not apply to them.

“Donald Trump stands out as among the most egregious examples of this misconduct. With the help of his children and senior executives at the Trump Organization, Donald Trump falsely inflated his net worth by billions of dollars to unjustly enrich himself and cheat the system.”

“All told, Mr. Trump, the Trump Organization, and the other Defendants, as part of a repeated pattern and common scheme, derived more than 200 false and misleading valuations of assets included in the 11 Statements covering 2011 through 2021,” the complaint says.

Today, I filed a lawsuit against Donald Trump for engaging in years of financial fraud to enrich himself, his family, and the Trump Organization.

There aren't two sets of laws for people in this nation: former presidents must be held to the same standards as everyday Americans.

Our suit against Donald Trump and the Trump Org alleges a years-long financial fraud scheme.

Here’s how Trump generated false and misleading values on his annual financial statements, which were then used to pay lower taxes, guarantee loans, and get better insurance rates: