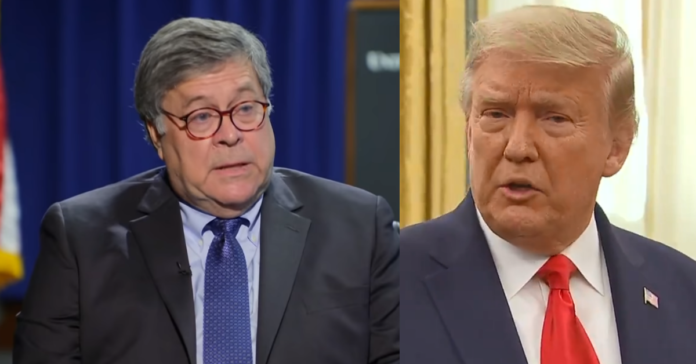 Attorney General William Barr broke his silence in an explosive interview with the Wall Street Journal that should put the fear of God into James Comey and others.

Barr said a “willful if small group of people” used the claim that Trump colluded with Russia in the 2016 election to try to “topple the administration.”

Barr insisted he was needed to reform the Department of Justice and ensure there is “one standard of justice.”

From The Wall Street Journal:

He reminds me why he took the job in the first place: “The Department of Justice was being used as a political weapon” by a “willful if small group of people,” who used the claim of collusion with Russia in an attempt to “topple an administration,” he says.

“Someone had to make sure that the power of the department stopped being abused and that there was accountability for what had happened.” Mr. Barr largely succeeded, in the process filling a vacuum of political oversight, reimposing norms, and resisting partisan critics on both sides.

Mr. Barr describes an overarching objective of ensuring that there is “one standard of justice.” That, he says, is why he appointed U.S. Attorney John Durham to investigate the FBI’s 2016 Crossfire Hurricane probe.

“Of course the Russians did bad things in the election,” he says. “But the idea that this was done with the collusion of the Trump campaign—there was never any evidence. It was entirely made up.” The country deserved to know how the world’s premier law-enforcement agency came to target and spy on a presidential campaign.

Barr said that the FBI’s conduct during their counterintelligence investigation into the Trump campaign was “outrageous.”

Barr weighed in on his decision to not divulge information that Joe Biden’s son, Hunter Biden, is under federal criminal investigation over his taxes and foreign business dealings.

“A lot of Republicans think that’s playing by Robert’s Rules — you are being soft on the other side. And I understand that frustration,” Barr said.

“It’s painful that the system is used against Republicans and there is an AG not willing to do the same thing against Democrats. But that is the only way we find our way back.”

“Think about the power it would give the federal bureaucracy,” Barr said. “The standard for investigating someone is low. So just gin up an investigation, make it public, affect every election.”