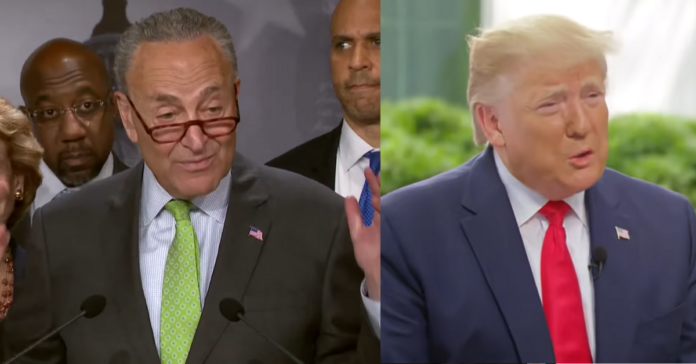 In a huge blow to Chuck Schumer, the Department of Justice under Biden’s pick Merrick Garland will not prosecute Trump admin officials after an IG report found they were not 100% truthful when they testified before Congress about the census. Chuck Schumer and other Dem Senators referred the case to the Inspector General. According to Govexec:

“The Biden administration has declined to prosecute former Trump administration officials, including former Commerce Department Secretary Wilbur Ross, after an inspector general confirmed they provided false testimony regarding the origins of the proposed citizenship question on the 2020 census.

“The Commerce IG launched its probe in 2019, following a request from lawmakers. The investigators did not make their report public, citing Privacy Act concerns, but said in a letter to Senate Majority Leader Chuck Schumer, D-N.Y., and Rep. Carolyn Maloney, D-N.Y., that Ross and other officials played a “substantive role” in proposing the addition of the citizenship question to the census. The proposal caused significant controversy as critics said it would deter non-citizens from participating in the count at all and it was eventually struck down by the Supreme Court.”

This is the letter the IG sent to Schumer giving him the bad news:

“On May 31, 2019, the Office of Inspector General (OIG) received a joint letter from 13 U.S. Senators alleging that the Department of Commerce (the Department) and the U.S. Department of Justice (DOJ) concealed the contribution of a political redistricting strategist in the rationale for the addition of a citizenship question to the 2020 Decennial Census (2020 Census). The letter made the following specific allegations:

“In depositions and congressional interviews, Justice and Commerce Department officials failed to disclose the substantive public policy role of political operative, [Political Strategist], in adding the question to the 2020 Census.

“In concealing the contribution of [Political Strategist], Justice and Commerce Department officials purposely obscured the impermissible racial and partisan motivations for adding a citizenship question—to be ‘advantageous to Republicans and Non-Hispanic Whites’ and to ‘clearly be a disadvantage to the Democrats’—in both the Justice Department’s December 2017 letter requesting the citizenship question and the Commerce Department’s March 2018 memorandum adding the question.”

“The allegations, if substantiated, would contradict the assertions of the then-Secretary of Commerce (then-Secretary) that the addition of the citizenship question was based solely on a DOJ request to assist in the enforcement of the Voting Rights Act of 1965.

“On June 27, 2019, our office initiated this investigation based on the allegations listed above and possible violations of 18 U.S. Code § 1001: Statements or entries generally. Our investigation was unable to establish that the Political Strategist had a substantive public policy role in the addition of the citizenship question to the 2020 Census. Our investigation did substantiate that correspondence from the Department to the DOJ contained verbiage similar to that used in portions of the Political Strategist’s unpublished study focusing on the use of Citizenship Voting Age Population for the purposes of redistricting; however, those similar portions related to historical and factual references to the Census and did not include the Political Strategist’s opinions.

“That request memorandum was signed by the DOJ on December 12, 2017. However, evidence shows there were significant communications related to the citizenship question among the then-Secretary, his staff, and other government officials between March 2017 and September 2017, which was well before the DOJ request memorandum. Evidence also suggests the Department requested and played a part in drafting the DOJ memorandum. Further, the then-Secretary sent a memorandum to the Department on June 21, 2018, clarifying his deliberations regarding adding a citizenship question to the Decennial Census.

“In this memorandum, the then-Secretary stated he began considering the content of the 2020 Census, to include reinstating the citizenship question, soon after his appointment to Secretary.

“This investigation was presented to and declined for prosecution by the Public Integrity Section of the DOJ’s Criminal Division,” said the letter to Schumer.

This is the letter Schumer sent asking for a probe.