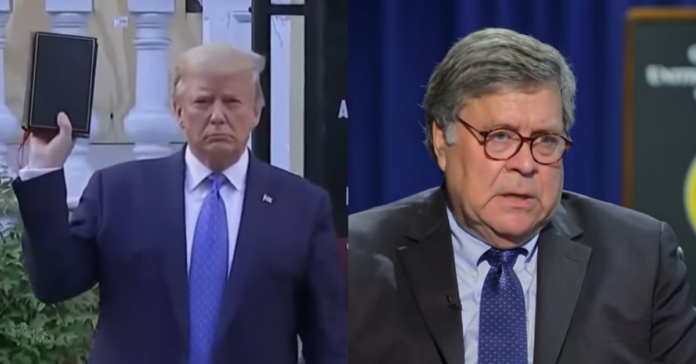 The Justice Department asked a judge to toss a lawsuit lodged against Trump, Barr, and the D.C. Metropolitan Police Department by the ACLU for the devastatingly simple reason that presidential security is of “paramount” government interest. DOJ argued that Trump and other U.S. officials are immune from civil lawsuits over police actions taken to protect a president and to secure his movements.

The left did not take the news well that Biden’s DOJ is backing Trump and Barr on this as they thought the photo-op of Trump holding a Bible in front of the historic St. John’s Church obscene and demanded action. So you know this one hurts. The Washington, D.C., chapters of the ACLU and Black Lives Matter sued the Trump administration over the use of chemical agents and rubber bullets to clear the crowd.

“It seems to me you have to clear the square before he walks to the church. Why is that not reasonable? How do I get over the clear national security concern over the president’s safety?” the judge asked at one point.

Lawyers for the ACLU said that despite legal precedents, the government’s defense would “authorize brutality with impunity” in the heart of Washington at one of the most symbolic spaces within the seat of the federal government.

If their defense was upheld, U.S. authorities “could have used live ammunition to clear the park, and nobody would have a claim against that as an assault on their constitutional rights,” said Scott Michelman, legal director for ACLU-D.C.

Police acted lawfully to protect the president while he moved a block from the White House through an unscreened crowd at a time of civil unrest, Justice Department trial attorney David G. Cutler said.

The Supreme Court in 2004 ruled that Secret Service agents could not be sued for damages by protesters who claimed their free-speech rights were violated when they were moved two blocks away from an Oregon restaurant where then-president George W. Bush was dining “beyond handgun or explosive reach.”

The incident resulted in four overlapping lawsuits against the Trump administration and law enforcement agencies filed on behalf of more than 100 U.S., D.C. and Arlington County defendants.

Lawyers for the plaintiffs and the Justice Department presented oral arguments before a federal judge on Friday, with government lawyers arguing that Trump and other U.S. officials could not be included in civil lawsuits against police over actions taken to protect a president, The Washington Post reported.

Trump’s photo-op outside the church following the forced removal of more than 1,000 largely peaceful protesters has been viewed by critics as a political stunt.

According to the Post, Justice Department lawyers also argued Friday that because of Trump’s 2020 election loss, future violations are unlikely, adding that President Biden’s administration does not share the same hostility Trump presented toward the wave of civil unrest and demonstrations that erupted in the months following Floyd’s death.

See America, NEITHER SIDE WORKS FOR THE AMERICAN PEOPLE! They protect themselves and kill us. They do not care for human life just ?