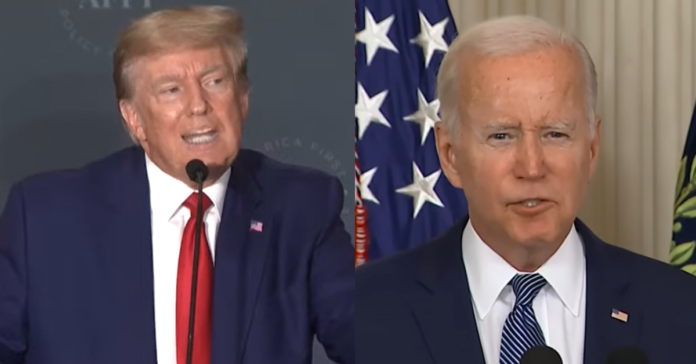 White House Chief of Staff Ron Klain took a swipe at former President Donald Trump while bragging about Biden’s recent string of legislative successes but missed and hit his boss instead.

Klain was on the Politico Playbook Deep Dive podcast with Ryan Lizza when he said Biden, unlike Trump, doesn’t create a sh*tstorm every single day. Klain was complaining about nonstop media coverage of Trump while Biden can’t get covered even when he leaves his basement.

The media is not reporting on Biden because they are covering for the disaster that he has been. The media doesn’t want to report on his embarrassing failures. The media relentlessly and ruthlessly covers Trump but that is not Trump’s fault.

And Trump is smart to use it to his advantage (as he did with all the free media in 2016). But if the media did cover Biden like Trump, it would sink Joe because Biden has fallen asleep on the job and the evidence is overwhelming.

The botched Afghan withdrawal, the baby formula shortage, inflation due to high energy costs caused by a war Biden knew was coming and did nothing (he went begging to the Saudis way too late to matter) to head off the brunt of the costs, etc, etc, etc.

The issues Trump had in office were surprises. Biden knew what was going to happen and did nothing u til it was too late every time.

If the media covered Biden like they do Trump Joe wouldn’t get elected dogcatcher in Delaware.

Below is a transcript of the interview.

RYAN LIZZA: What is the thing about Biden that you think is the least understood either in the media, from the media, or from from the public, as someone who sees him every day and has known him for a very long time?

RON KLAIN: So I don’t think it’s true he’s out there less than his predecessors. I just think Donald Trump created an expectation of a president creating a shitstorm every single day. And that led to a cycle of cable news coverage and Twitter and so on and so forth. And I understand that made people in your line of work, you know, very busy and very productive.

I don’t think it was good for the country. I don’t think the voters wanted it. And I think 81 million of them showed up last, in 2020 and said they wanted a different kind of president. And that’s who Joe Biden is.

You know, people can continue to hold endless cable chat-a-thons about what Donald Trump had for lunch at Mar-a-Lago or what plates he threw against the wall. Or they can explain how people are going to save hundreds of dollars by taking advantage of the tax breaks and the inflation reduction act.

But what I know is our job is to do our jobs here at the White House in the way President Biden was elected to do his job in the White House. And then we’ll let the voters decide.

While the collapse of the Afghan government was rapid, the government had many months to prepare for the scheduled withdrawal. Yet, it took no steps to remove or destroy this equipment. Instead, it elected to leave this arsenal intact to the Taliban… https://t.co/kwM84qGnoA