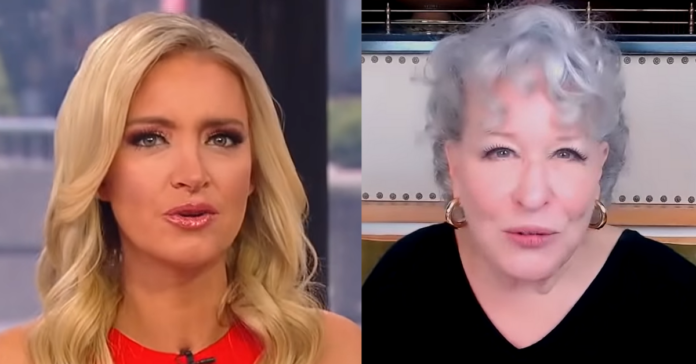 President Joe Biden and others on the left are finally waking up to a massive crisis in the baby food market and are desperate to pass the blame. Biden would only take a question on the topic because “all of a sudden it’s on the front page of every newspaper.”

Biden was asked why he didn’t take steps sooner to deal with the lack of baby formula everyone saw coming and Joe said: “If we had been better mind readers, I guess we could’ve but we moved as quickly as the problem became apparent to us.”

Biden was quickly denounced for his tone-deaf remark and the left went into protect mode with one of Biden’s more shrill defenders Better Midler trying her best. But Kayleigh McEnany quickly shut down the Hollywood star.

Kayleigh shot back: “Not if you’ve had a prophylactic double mastectomy…”

Not if you've had a prophylactic double mastectomy… https://t.co/VvyXs9FAqG

“People are piling on because of former tweet.  No shame if you can’t breastfeed, but if you can & are somehow convinced that your own milk isn’t as good as a “scientifically researched product”, that’s something else again. The monopoly news is news to me, tho, no lie.”

Former President Donald Trump said: “The Democrats are sending another $40 billion to Ukraine, yet America’s parents are struggling to even feed their children. There is a massive formula shortage, but no one is talking about it—it is a national disgrace.

“It is unthinkable that in the year 2022 American families are unable to get baby formulas for their children. Families whose children have serious allergies and require “elemental” formula are in even more desperate and dire straits.

“The pain that mothers and fathers are going through who literally cannot get nutrition for their newborns and infants is a mark of eternal shame on the Democrat Party. America First!”

As for Biden he shamelessly tried to play dumb about the crisis despite the fact his FDA shut down a major plant months ago.

And he knows or should know that this industry is heavily regulated (some say corruptly by a few producers) so shortages without some action or planning by his team were guaranteed. Guaranteed. They knew or should have known it is that simple.

Here’s how Biden handled the crisis yesterday with the media.

People are piling on because of former tweet. No shame if you can’t breastfeed, but if you can & are somehow convinced that your own milk isn’t as good as a “scientifically researched product”, that’s something else again. The monopoly news is news to me, tho, no lie. #WETNURSES