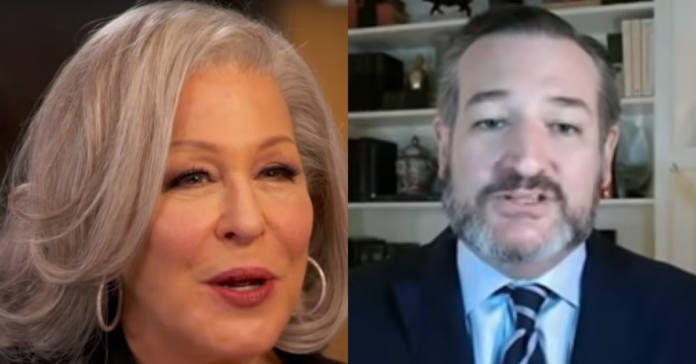 Senator Ted Cruz is not afraid to speak his mind and take the incoming from the Democrats and their allies in Hollywood and the media.

Cruz seems to wear the controversy he causes as a badge of honor. He shocked the political world earlier in the week when he offered an olive branch to AOC over some questionable moves by big players on Wall Street.

The nation hoped this agreement of political opposites would finally lead to some bipartisan cooperation in Congress that would directly result in wins for the American people.

AOC rebuffed Ted and offered to work with other members of the GOP instead and with her childish response, she hurt not helped bipartisanship.

Now we have Hollywood star and fervent GOP critic Bette Midler piling on Ted with a vulgar joke. Ted loves the back and forth, especially with Hollywood and so far he has been silent but do not expect him to stay that way.

Besides feuding with Hollywood stars and childish Dems, Cruz is trying to get term limits for Congress, something that has wide support among the American people.

U.S. Senator Ted Cruz, along with other Republican Senators, has reintroduced an amendment to the U.S. Constitution that would impose term limits on members of Congress.

“Every year, Congress spends billions of dollars on giveaways for the well-connected: Washington insiders get taxpayer money and members of Congress get re-elected, all while the system fails the American people.

The amendment would limit U.S. Senators to two six-year terms, and members of the House of Representatives to three two-year terms.

“The rise of political careerism in today’s Congress is a sharp departure from what the Founders intended for our federal governing bodies.

I have long called for this solution for the brokenness of Washington, D.C., and I will continue fighting to hold career politicians accountable.

As I have done in the past, I urge my colleagues to submit this constitutional amendment to the states for speedy ratification,” Sen. Cruz said.

Confused about what happened this week with GameStop and Robin Hood?

This column is very insightful and helpful for understanding the details.

The same rules should apply to everybody—rich & poor alike. https://t.co/3ltPKYxH5s