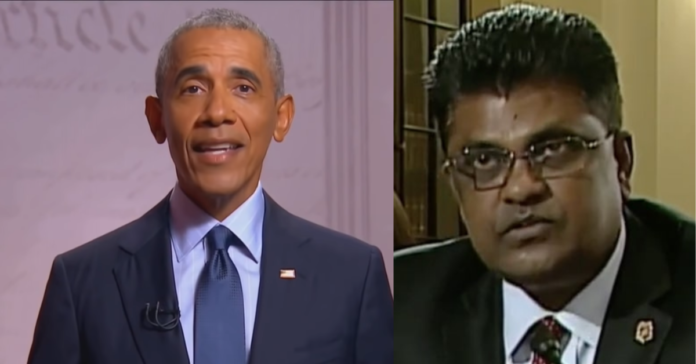 Charles K. Edwards, 61, served in the Obama administration as the Acting Inspector General for the Department of Homeland Security between February 2008 until December 2013. He also served before that as the inspector general for the U.S. Postal Service.

Today he plead guilty to conspiring to defraud the United States government. Edwards had been accused of the swampy move of scheming to steal confidential and proprietary software from our government to set up his own company after he left. The Department of Justice issued a statement that said:

“A former Acting Inspector General for the U.S. Department of Homeland Security, Office of Inspector General (DHS-OIG) pleaded guilty today to federal charges stemming from the theft of proprietary software and sensitive databases from the U.S. government.

“According to court documents, Charles K. Edwards, 61, of Sandy Spring, Maryland, executed a scheme to steal confidential and proprietary software from the government. Edwards worked for DHS-OIG from February 2008 until December 2013, including as Acting Inspector General.

Justice Department: “Charles Edwards, a former Acting Inspector General for the Department of Homeland Security, pleaded guilty today to federal charges stemming from the theft of proprietary software and sensitive databases from the U.S. government.” pic.twitter.com/fKUbjZTeGM

“Prior to DHS-OIG, he worked at the U.S. Postal Service Office of Inspector General (USPS-OIG). At both agencies, Edwards had access to software systems, including one used for case management and other systems holding sensitive personal identifying information of employees.

“After leaving DHS-OIG, Edwards founded Delta Business Solutions Inc., located in Maryland. From at least 2015 until 2017, he stole software from DHS-OIG, along with sensitive government databases containing personal identifying information of DHS and USPS employees, so that his company could develop a commercially-owned version of a case management system to be offered for sale to government agencies.

“A second defendant in the case, Murali Y. Venkata, 56, of Aldie, Virginia, has pleaded not guilty to charges and his case remains pending.

“Edwards will be sentenced at a later date. A federal district court judge will determine any sentence after considering the U.S. Sentencing Guidelines and other statutory factors.

“Senior Litigation Counsel Victor R. Salgado of the Criminal Division’s Public Integrity Section and the Public Corruption and Civil Rights Section of the U.S. Attorney’s Office for the District of Columbia are prosecuting the case,” DOJ said.

In 2020, when Edwards was indicted, DOJ said he stole the software so that he could sell an enhanced version to the U.S. Department of Agriculture. It was also alleged that he and the second defendant, Murali Yamazula Venkata, reconfigured Edwards’ laptop to upload the stolen software and had built a testing server at his residence with the software and database.

Edwards was also accused of having retained software developers in India for the purpose of making the alternative software.

Justice Department: “Matthew LumHo, a former official of the Department of Defense’s Office of Inspector General was sentenced today to 7.5 years in prison for accepting bribes & defrauding the government, among other crimes, in relation to a contract he oversaw at the DoD OIG.” pic.twitter.com/KARUSJwuY1