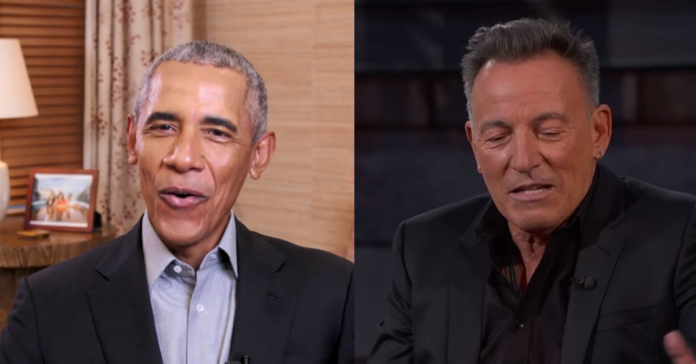 Barack Obama is launching a new show on Spotify and his co-host will be Bruce Springsteen. The show will be called “Renegades: Born in the USA,” and will be a podcast but Spotify also films those so it should be in video format too. (See a clip of the show below)

“How did we get here? How could we find our way back to a more unifying American story?” Obama says in the released intro for the show. “On the surface, Bruce and I don’t have a lot in common. But over the years, what we’ve found is that we’ve got a shared sensibility.”

He added, “About work, about family and about America. In our own ways, Bruce and I have been on parallel journeys trying to understand this country that’s given us both so much.”

The podcast will be produced by Barack and Michelle Obama’s production company, Higher Ground.

“It is a personal, in-depth discussion between two friends exploring their pasts, their beliefs, and the country that they love — as it was, as it is, and as it ought to be going forward,” Spotify said in a statement, before saying the two “have formed a deep friendship since they first met on the campaign trail in 2008.”

The Swedish streaming service has committed more than $500 million to acquiring podcast companies and has struck exclusive deals with big names including Joe Rogan and Kim Kardashian and major brands like Warner Bros.

In 2019, Spotify signed an exclusive deal with the Obamas to produce podcasts. Their first production, The Michelle Obama Podcast, was the top global podcast when it launched last summer, and Spotify is betting that the Obama-Springstreen series will have similar appeal worldwide.

Many of the conversations between Obama and Springsteen are likely to focus on fixing America’s cultural and political divides.

The first two episodes of #RenegadesPodcast with President @BarackObama and @Springsteen are out right now 🤯 https://t.co/piXieqnYrJ pic.twitter.com/RWIqkLx3tH

Spotify announces “Renegades: Born in the USA” featuring Barack Obama and Bruce Springsteen in conversation “on issues ranging from politics and the state of America to fatherhood, marriage and manhood.” https://t.co/MaMZyTl7p4