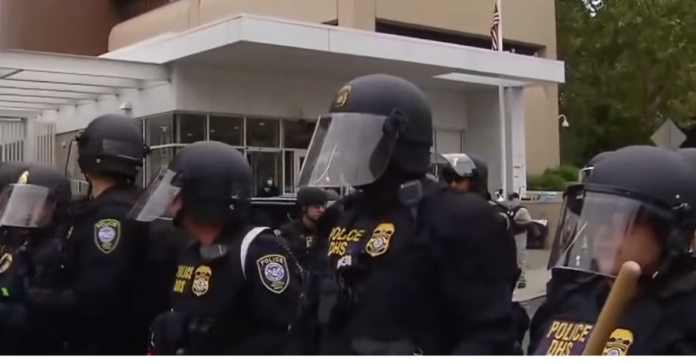 President Trump has ordered ICE to round up illegal immigrants who have received their deportation orders from the government.

For many different reasons – some lost their asylum cases, some committed crimes or failed background investigations, some for other reasons but all these people are scheduled to be deported.

But they refuse to go voluntarily and so Trump is making his move. Which caused the left to lose their minds – they even replaced the USA flag with the Mexican flag in one protest.

But what just happened it Washington is a bridge too far, even for the left. From Fox News:

The Seattle Times reported that the unidentified man appeared outside of the Northwest Detention Center in Tacoma with a rifle and threw incendiary devices at both the facility and nearby propane tanks, at one point setting a vehicle on fire.

Officers responded to the incident around 4 a.m. and called out to the man before shots were fired. It was not clear how many shots were fired or whether the man fired at police.

Police spokesman Loretta Cool said the officers weren’t wearing body cameras, but the area is covered by surveillance cameras from the detention center. The four officers involved were placed on administrative leave in accordance with the department’s policy. None of them were injured.

ICE said in a statement that no employees “were harmed nor involved in this tragic incident.”

The shooting took place hours after a rally in front of the detention center to protest planned mass deportation raids around the country. The Tacoma facility, which is run by the Department of Homeland Security, holds migrants pending deportation proceedings. The detention center has also held immigration-seeking parents separated from their children under President Donald Trump’s “zero tolerance” policy, an effort meant to deter illegal immigration.

The administration’s child separation policy was the subject of a contentious Congressional hearing Friday, during which former ICE director Tom Homan vehemently defended law enforcement amid criticism from Democratic politicians.

“As a 34-year veteran of law enforcement, it is shocking, shocking to see constant attacks against those that leave the safety and security of their homes every day, put on a Kevlar vest and put a gun on their hip and risk their own safety to defend this nation,” he said, at times appearing to get choked up as he defended his former colleagues.