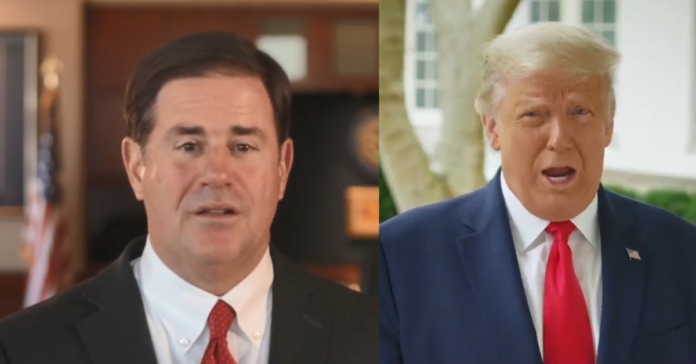 President Trump’s legal team is in multiple states across the country trying to fight until each state certifies and he faces a steep uphill battle.

There are reportedly efforts underway to try to get a different slate of electors in key states to throw the election to the House if his legal challenges continue to come up short. This option is legally dubious and there is a big chance that if that scenario came to pass it would likely end with President Pelosi due to the weird rules of Congress.

The states will start to certify their results soon which will bring clarity to the situation. Arizona Doug Ducey finally broke his silence and said the state will not certify until all court cases are done.

Arizona counties certify on Nov. 23 and ten days after the state does.

Gov. Doug Ducey said Wednesday Arizona’s election is not over until all of the court cases are settled.

The state Republican Party and the Trump campaign are suing to keep Maricopa County from certifying its vote claiming there were voting irregularities in the state’s largest county.

Before the election, Ducey had plenty of praise for Arizona’s election system but on Wednesday he would not go so far as to say the election was without problems.

“There are legal claims that are being challenged in court and everybody on the ballot has certain access rights and remedies and if they want to push that they are able. Once those are adjudicated and the process plays out, I will accept the results of the election,” Ducey said.

Ducey said he has heard about voting problems in the state but has not personally seen any evidence showing those problems existed.

Ducey has not made a similar statement about Joe Biden in the presidential race and said he will not do that until the court cases are settled.

On Wednesday, Secretary of State Katie Hobbs said she has received threats against her and her family while the court cases play out.