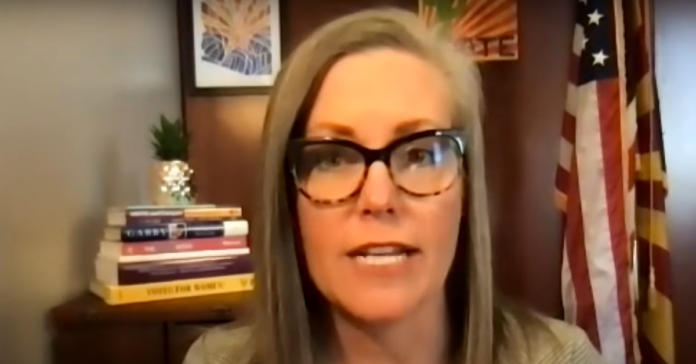 Arizona lawmakers voted late last week to strip power from the Dem Secretary of State Katies Hobbs and give more power to the state’s Attorney General. The measure was inserted into budget legislation last week.

The Republican-controlled state legislature voted to revoke the Democratic secretary of state’s legal authority in election-related lawsuits and gave those powers to the Republican attorney general. Hobbs called the move “egregious,” before accusing the GOP of  “weaponizing the process to take retribution against my office.”

From ABC: On Tuesday morning, the Arizona House Appropriations Committee stripped Secretary of State Katie Hobbs of her ability to defend election lawsuits. It gave the power exclusively to the Attorney General. Later in the day, the state’s Senate Appropriations Committee passed the same changes. Now these proposed changes are part of the full budget proposal that will be voted on later this week.

“We are meddling with the constitution,” State Representative Randy Friese, (D) Tucson, said. Friese and other Democrats see the move as a response to Secretary of State Hobbs’ use of outside counsel to defend Arizona voters from lawsuits filed by the State Republican Party and others challenging Arizona’s election results. Hobbs also did not support a decision by the Attorney General to pursue a ballot harvesting case in federal court. Earlier this year Attorney General Mark Brnovich argued against the practice before the U.S. Supreme Court.

Most other election provisions in the Arizona budget legislation are billed as safeguards against fraud, almost none of which has been found in the past election. One orders a review of voter registration databases in counties with more than 1 million residents — that is, the counties that are home to the Democrat-leaning cities of Phoenix and Tucson.

A new Election Integrity Fund would dole money to county election officials to toughen security and to finance hand counts of ballots after elections. That would appear to open the door to more fraud investigations like the Republican-ordered review of November election ballots in Maricopa County, which was carried by President Joe Biden and Arizona’s two Democratic senators.

That effort has been mocked by experts for its high-resolution examination of ballots for evidence of fakery, including bamboo fibers and watermarks that, according to a QAnon conspiracy theory, are visible only under ultraviolet light.

But the legislation requires all future ballots to contain at least three anti-fraud countermeasures like holograms, watermarks, ultraviolet-visible numbers or intricate engravings and special inks.

It also appropriates $500,000 to determine whether social media and search engine algorithms are biased for or against “one or more candidates of a political party” and whether candidates’ access to them has been restricted. The legislation suggests that such actions could amount to in-kind contributions to candidates or parties that were not reported under Arizona law.

Republican legislators cast the anti-fraud clauses as common-sense steps to make elections safer. State Sen. Sonny Borrelli, who proposed the changes to ballots, said many of the countermeasures were already used to make it hard to produce counterfeit currency.

“Shouldn’t your ballot have the same protections?” he said.

The bill drew immediate criticism from voting-rights advocates, who called its provisions the stuff of conspiracy theories.

“This is legislating based on the big lie,” said Emily Kirkland, the executive director of one group, Progress Arizona. “And it’s a really dangerous way to approach making law.”

It isn’t your authority, it is the authority of the office and when that authority is abused, we make the necessary adjustments to protect the Arizona Constitution and the people of our state. https://t.co/UYLcynsxyy

Last night, the Senate passed a budget that attacks my authority and resources in a move that is clearly a power grab. Here is my response.⬇️ #AZLeg #AZBudget pic.twitter.com/p6RsYIv50E

What honest person calls an audit a #FraudIt when she doesn’t even know what the findings are? Or maybe she does know? https://t.co/EPXWHa2dEV