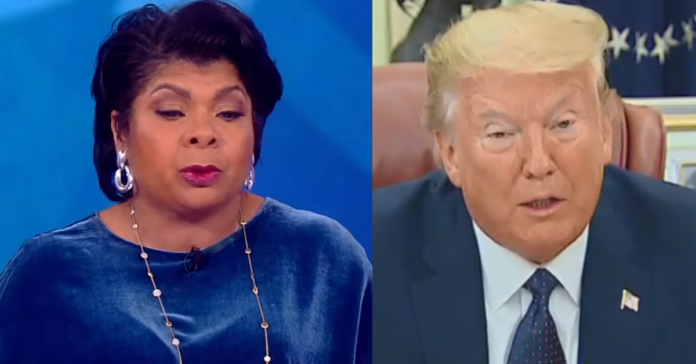 CNN’s April Ryan stunned viewers with her naked partisanship and the over-the-top way she went after President Trump over the weekend.

She actually said on CNN that she “cannot wait” to see President Trump forcefully removed from the White House.

“Going back to the issue of January 20th, about the president not leaving — Maya Angelou said, “if they show you who they are, believe them.” The president has said before, in many tweets, that he wasn’t going, he said it months ago. Joe Biden’s even acknowledged it, and it’s real,” she said.

“There’s going to be a split-screen on Jan. 20, 2021. If Joe Biden is now going to be the 46th president of the United States, you will have him being inaugurated and watching police and armed forces trying to pull Donald Trump out of the White House. I cannot wait for that split-screen,” Ryan said.

Hillary Clinton, Rep. Maxine Waters, D-Calif., and Rep. James Clyburn, D-S.C., have also recently expressed concern that Trump will refuse to leave the White House if he loses the election, with many prominent liberals claiming Trump’s rhetoric dismissing mail-in ballots is the foundation for the theory.

Press secretary Kayleigh McEnany told “Outnumbered Overtime” last month she found it “comical” that top Democrats have suggested the president may not leave office if he loses his bid for reelection in November.

“It’s quite comical to watch the Democrat Party talk about not accepting the results of the election,” McEnany said, “because the only people who haven’t accepted the results of elections are people in the Democrat Party, like Hillary Clinton, who’s blamed her loss on, I think it was something like two dozen different entities, never blaming herself.”

Fox News host Harris Faulkner pointed out that Trump had told her in a recent interview that he would leave office in January 2021 if the election doesn’t go his way, saying, “certainly if I don’t win, I don’t win.”

The theory is nothing new, as many members of the mainstream media made similar predictions in 2019 when the Mueller probe didn’t force Trump out of office.

April Ryan: If Biden Wins, We’ll Watch Him Inaugurated on a Split Screen With ‘Police and Armed Forces Trying to Pull Trump Out of the White House’ https://t.co/dRpLMFIMDG