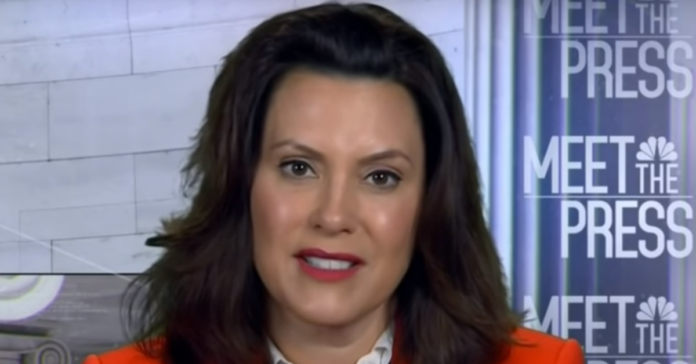 Gov. Gretchen Whitmer just got some terrible news from the Michigan Court of Appeals and now she will join California Governor Gavin Newsom in fighting off a recall effort. Newsom famously lost his battle to keep his recall from the voters and he faces an uncertain political future. Whitmer now too faces a political future clouded by her scandals and multiple recall petitions.

The Michigan Court of Appeals ruled Thursday that the Board of State Canvassers was correct to approve multiple petitions seeking to recall Gov. Gretchen Whitmer. The court approved seven petitions, six looking to recall Whitmer and one to recall Lt. Gov. Garlin Gilchrist II can proceed

Whitmer’s spokesperson Mark Fisk said: “We plan to appeal this disappointing decision and we fully intend to beat back these irresponsible partisan attacks against the Governor in the courts, on the streets or at the ballot. This is part of a massive and coordinated attack by Republicans trying to make the Governor fail and our campaign will strenuously oppose these efforts so the Governor can keep saving lives, reopening our economy and creating jobs.”

She is under fire for breaking her own pandemic rules and guidelines. “We will be issuing a letter to Governor Whitmer with specific questions related to her junket to Florida. Based off the response we receive, the Oversight Committee will consider doing hearings on this scandal,” Rep. Steve Johnson, the chairman of the Michigan House Oversight Committee, said about her secret trip to Florida.

“The people of Michigan deserve answers on what the Governor is trying to hide and why.”

Whitmer was spotted breaking her rules at the Landshark Bar & Grill in East Lansing. She later apologized for the incident.

The hurdle to recall elected officials in Michigan is high due in part to a 2012 law that changed parts of the recall process. It said recall language had to be clear and factual, — the legal bar the Court of Appeals affirmed this set of petitions had met in its ruling.

But it also disallowed recalls during the first and last years of an official’s four-year term and made it so recall petitions’ signatures would need to be collected in a 60-day period instead of a 90-day period.

The number of signatures needed for a statewide recall is 25% of the votes cast for all candidates for the office of Governor in the last gubernatorial election and currently sits at just over a million. Collecting that many signatures is difficult and expensive, something recall organizer Jim Makowski spoke with MLive about last fall.

“It’s truly a David versus Goliath scenario,” said Makowski at the time.

His was one of the petitions the COA affirmed the approval of Thursday.

The Whitmer campaign had made a series of arguments that petitions did not meet the legal standards, all of which left the court unconvinced. Among them:

One petition, from Makowski, stated “Gretchen Whitmer issued Executive Order 2020-143 on July 1, 2020 closing indoor service at bars.” The Whitmer campaign argued the meaning of the word “bar” was ambiguous.

The court disagreed, saying, “We reject this argument. Any person invited to sign the petition would very likely envision a reference to a conventional tavern, where people can purchase and consume alcoholic beverages…”

However, the Court of Appeals ruled that the law doesn’t apply, since the recall language is not about legislation but executive orders.

In relation to Baase’s petition, the Whitmer campaign argued the petition identified her by name and title in the petition form where it called for that information, but didn’t restate it in the recall language, thus not adequately describing the officer the petition seeks to recall. “We reject this argument as it is unpersuasive,” wrote the COA.

In another petition from Makowski focused on nursing homes, the Whitmer campaign argued the language contained “a series of indiscernible ellipses/dots followed by a quote.” The Board of State Canvassers doesn’t seem to have encountered the stray characters, the court noted, and they don’t appear in other renditions.

“It appears that the gibberish of which the Governor complains is but an occasional irregularity bound up with the processing of electronic documents,” the Court of Appeals wrote.