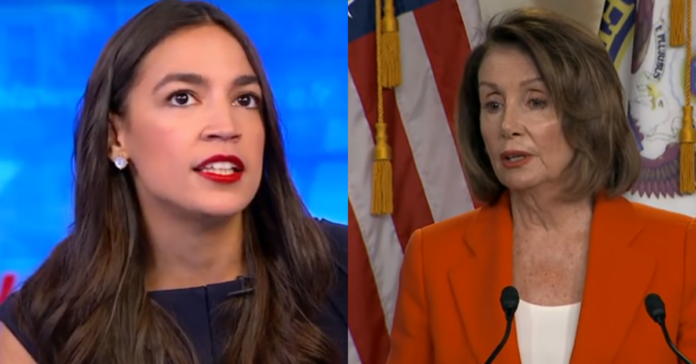 Make no mistake, Pelosi is a ruthless ruler of her caucus and she has never seen anything like AOC.

AOC doesn’t need Pelosi’s cash and she has her own social media following so Pelosi cannot control her.

This is by far Pelosi’s toughest test as Speaker and there is no indication she will come out the winner, in fact, her power seems to be slipping from her grasp.

The remarks came hours after Pelosi, at a closed-door meeting of the caucus earlier Wednesday, admonished her party for openly attacking one another over policy disputes. Pelosi has consistently dismissed some of the policies floated by the more liberal members of the caucus, most recently using a New York Times interview over the weekend to question the influence of four outspoken freshmen known as “the squad” — Reps. Ilhan Omar (D-Minn.), Rashida Tlaib (D-Mich.) Ayanna Pressley (D-Mass.) and Ocasio-Cortez.

“All these people have their public whatever and their Twitter world,” she said to The New York Times. “But they didn’t have any following. They’re four people and that’s how many votes they got.”

Ocasio-Cortez, who has been outspoken on a bevy of issues since being sworn in, responded to the comment on Twitter on Saturday, saying, “That public ‘whatever’ is called public sentiment.”

“And wielding the power to shift it is how we actually achieve meaningful change in this country,” she added.

In a closed-door caucus meeting Wednesday, Pelosi called on Democrats to stop taking public shots at one another, according to a source in the room.

“You got a complaint? You come and talk to me about it. But do not tweet about our members and expect us to think that that is just OK,” Pelosi said.

In an earlier interview with The New Yorker Radio Hour, Ocasio-Cortez accused Congress of using  women and minorities as “bargaining chips.”

“When it comes to women of color in Congress, particularly the freshman, it’s that we both have encountered and represent communities that have been auctioned off and negotiated off for the last 20 years. And we’re over it,” Ocasio-Cortez said Tuesday.

“We see in these negotiations all the time— it’s like fighting for black communities or policies that help women. They’re bargaining chips. And they’re the first chips that are reached for in any legislative negotiations.”