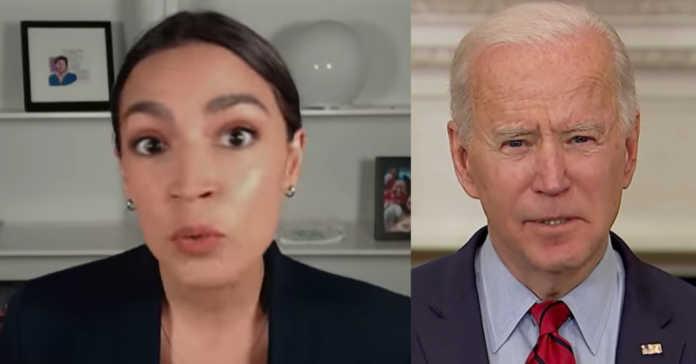 Rep. Alexandria Ocasio-Cortez (D-NY) went on MSNBC last night and ripped Joe Biden but not in any normal political way, she called his immigration policies inhumane. “I think the issue here, and first of all, I think this is not just about the vice president. This is about the Biden administration’s immigration policy writ large is not working,” she said.

She continued, “It’s wrong, and it’s inhumane. It’s rooted — and he inherited it. But frankly, this was also a problem not just inherited by Donald Trump, but inherited by Barack Obama, all the way back to the creation of DHS and ICE under George Bush.”

“We cannot, as a country, no matter who it is, continue to show up in Latin America and say that this is their fault, or that they are to blame, right? Because this seems like almost a precursor to say — in saying that we are going to allege that you are coming to this country illegally, when seeking asylum on our border is, in fact, legal, and use that to pre-date any violence that we are willing to inflict on immigrants as a deterrent,” she said.

Kamala said, “I want to emphasize that the goal of our work is to help Guatemalans find hope at home, at the same time I want to be clear to folks in this region who are thinking about making the dangerous trek to the United States-Mexico border — do not come, do not come. There are legal methods by which migration can and should occur.”

“The United States will continue to enforce our laws, and secure our border. There are legal methods by which migration can and should occur, but we, as one of our priorities, will discourage illegal migration. And I believe if you come to our border, you will be turned back,” Kamala added.

AOC said: “This is disappointing to see. First, seeking asylum at any US border is a 100% legal method of arrival. Second, the US spent decades contributing to regime change and destabilization in Latin America. We can’t help set someone’s house on fire and then blame them for fleeing.”

“It would be helpful if the US would finally acknowledge its contributions to destabilization and regime change in the region. Doing so can help us change US foreign policy, trade policy, climate policy, & carceral border policy to address causes of mass displacement & migration,” AOC added.

Guatemalan President Giammattei said in a CBS News interview that aired Sunday that the Biden administration is to blame for sparking the migration crisis.

The Guatemalan president said he and Harris “are not on the same side of the coin” on migration.

“We asked the United States government to send more of a clear message to prevent more people from leaving,” Giammattei said.

It would be helpful if the US would finally acknowledge its contributions to destabilization and regime change in the region.

Trump did this to protesters in DC last year. It was unacceptable then, and it's unacceptable now. @POTUS, your administration has an obligation to protect Indigenous organizers and their allies. Not corporate interests.