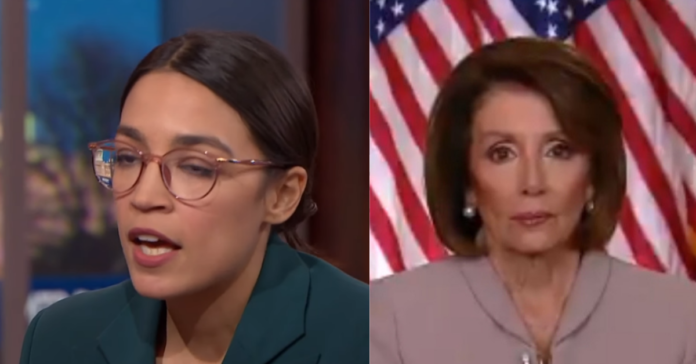 The Democrats have officially removed all doubt – they are a political disaster. The whole party, all of them, they just do not know what they are doing.

First, they promote the never popular platform of reparations, busing, and abolishing private insurance in their debates.

Next, they call Joe Biden a racist. Now, we have AOC doing more of the same to Nancy Pelosi.

AOC lashed out and said Pelosi was disrespectful and ‘singling our women of color.’ When asked today of she thinks Pelosi is a racist she backtracked and said no. But just having to answer the question is a self-own and a huge win for Trump.

From The Hill: Rep. Alexandria Ocasio-Cortez (D-N.Y.) said Thursday that Speaker Nancy Pelosi (D-Calif.) is “absolutely not” racist after accusing her the day before of targeting four women of color in the House for criticism.

“No, no, absolutely not,” Ocasio-Cortez told CNN when asked if she believed Pelosi was racist or motivated by racial animus.

However, the freshman progressive stood by her criticism of Pelosi for dismissing her and fellow Democratic Reps. Ilhan Omar (Minn.), Ayanna Pressley (Mass.) and Rashida Tlaib (Mich.). Ocasio-Cortez had earlier accused Pelosi of “persistent[ly] singling out … newly elected women of color.”

The remarks came hours after Pelosi, at a closed-door meeting of the caucus earlier Wednesday, admonished her party for openly attacking one another over policy disputes. Pelosi has consistently dismissed some of the policies floated by the more liberal members of the caucus, most recently using a New York Times interview over the weekend to question the influence of four outspoken freshmen known as “the squad” — Reps. Ilhan Omar (D-Minn.), Rashida Tlaib (D-Mich.) Ayanna Pressley (D-Mass.) and Ocasio-Cortez.

“All these people have their public whatever and their Twitter world,” she said to The New York Times. “But they didn’t have any following. They’re four people and that’s how many votes they got.”