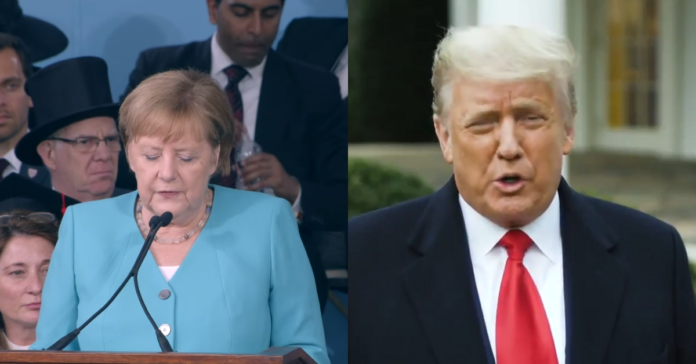 Merkel was never a big fan of Trump’s so this comes as a bit of a surprise. The ban from what most believe relates to these Q people who find hidden messages in Trump’s tweets.

Once he leaves office do not be surprised to see him back on – with a short leash – these social media platforms.

Merkel delivered her thinking on the issue via spokesman, Steffen Seibert.

Seibert said Twitter’s decision could undermine the “fundamental right” to freedom of speech.

He said social media companies “bear great responsibility for political communication not being poisoned by hatred, by lies and by incitement to violence,” before adding that the right to freedom of opinion is of “elementary significance.”

“This fundamental right can be intervened in, but according to the law and within the framework defined by legislators — not according to a decision by the management of social media platforms,” Seibert said.

“Seen from this angle, the chancellor considers it problematic that the accounts of the U.S. president have now been permanently blocked.”

“I don’t like anybody being censored or taking away from the right to post a message on Twitter or Facebook. I don’t agree with that, I don’t accept that,” López Obrador said on Thursday.

“How can you censor someone: ‘Let’s see, I, as the judge of the Holy Inquisition, will punish you because I think what you’re saying is harmful,’” he added.

“Where is the law, where is the regulation, what are the norms? This is an issue of government, this is not an issue for private companies.”

German Chancellor Angela Merkel has criticized Twitter for banning President Trump, saying that social media networks shouldn’t have the power to decide who is allowed to exercise free speech.https://t.co/j2vz2D30sl