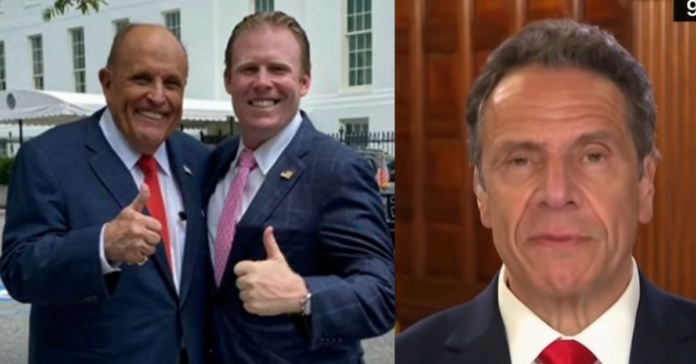 A former top aide to President Donald Trump and son of Rudy Giuliani, Andrew Giuliani, said he will take on disgraced New York Governor Andrew Cuomo in the 2022 election.

“I plan to run,” Giuliani told The Washington Examiner.

“I believe I can win the race,” he said. “I think I’m the right candidate, and this is the right time to help change New York State, and we’ve got a playbook that works,” said Giuliani.

“Whoever ends up winning is going to have to implement the Giuliani playbook on public safety, so who better to do that than a Giuliani?” he said.

“New York is going to be one of two states over the last decade to lose population. It just shows how terribly Cuomo has run the state into the ground, and the truth is the assembly in state Senate is to blame as well.

“It’s a combination of bail reform, increased taxes, and plummeting quality of life.

“So I think people will have to determine whether I am, you know, Giuliani 2.0 or whether I’m a new thing.

“I look forward to making my case and letting New Yorkers determine that for themselves,” he said.

Boris Epshteyn, who served as special assistant to Trump, said:

“Andrew worked tirelessly for President Trump in the White House while still having a smile on his face every day.

“I know that he was specifically focused on issues vital to New Yorkers, including getting funds to 9/11 first responders and working to ensure that relief for the Metropolitan Transportation Authority would be included in the CARES Act.”

NEW: Andrew Giuliani will run for governor of New York in 2022, he told the Washington Examiner. https://t.co/yas2vPGrDw

All funds NYS budget for the past three years:

Is Andrew Giuliani the New York GOP’s best shot at taking back the Governor’s mansion? https://t.co/srhYxL23vz