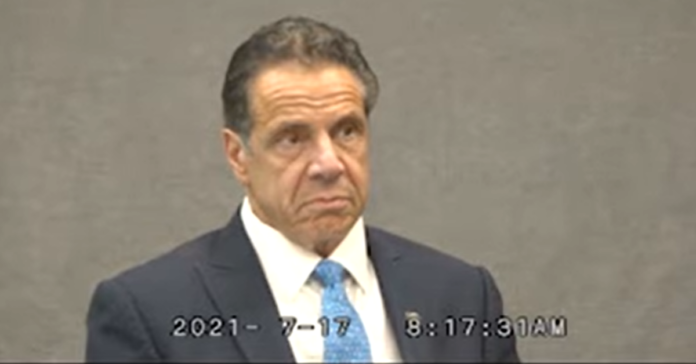 In October Cuomo was charged with forcible touching, a misdemeanor, after the report dropped. Now he can a federal probe to his legal nightmare.

The New York Post discovered the probe after noticing some strange language in a legal services contract signed in October. The documents were released by the state Comptroller’s Office in response to a Freedom of Information Law request.

The contract notes previously revealed Department of Justice investigations into the Cuomo administration’s handling of the COVID-19 pandemic, its cover-up of nursing home deaths and Cuomo’s $5.1 coronavirus memoir.

But the Post discovered a new line item, “DOJ has also undertaken an inquiry related to sexual harassment claims made against the then Governor.”

“Our understanding is that the Civil Division opened an inquiry in August based upon the AG’s politically motivated sham report and we have heard nothing since,” Cuomo’s spokesman Rich Azzopardi said.

Chris Cuomo is in the middle of his fall from grace and not many expect him to survive at CNN.

CNN is under pressure to enlist an outside, white-shoe law firm to investigate the scandal surrounding suspended anchor Chris Cuomo, but it is unclear if the liberal network will.

The scandal-plagued, liberal network has said Cuomo is suspended “indefinitely, pending further evaluation,” but has not shed any light on who exactly will be investigating.

“It goes beyond the pale to think that an internal probe here would be appropriate and satisfy an ethical response. Who would trust that?