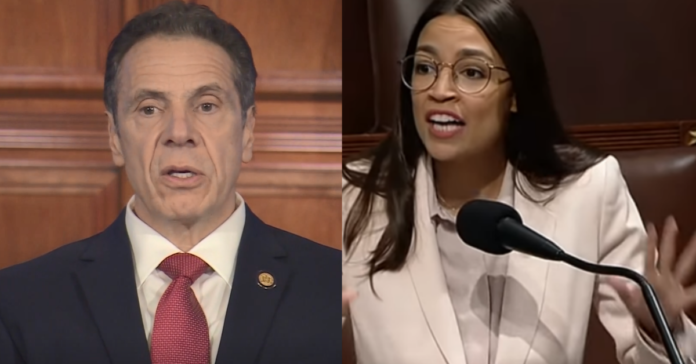 New York Rep. Alexandria Ocasio-Cortez stunned the country and many New Yorkers with her astounding comments about the spike in crime in the city.

Many minority community leaders are calling for the immediate reinstatement of the anti-crime division that has been put out to pasture.

This unit was plains clothes detectives who worked the streets to stop violent crimes. Gov. Andrew Cuomo immediately shut down AOC’s claim that crime was related to people not being able to pay rent.

From The New York Daily News:

Cuomo took aim at the Democratic congresswoman representing parts of Queens and the Bronx after he was asked during a press briefing in Manhattan about her recent claim that the crime spike could be connected to New Yorkers having a hard time making rent amid the coronavirus pandemic.

“It is factually impossible that somebody committed a crime so they could pay their rent,” the governor said, noting that the recent crime uptick is dominated by shootings and other violent offenses.

The governor also argued Ocasio-Cortez’s reasoning isn’t sound because he has signed executive orders and legislation, specifically the Tenant Safe Harbor Act, ensuring New Yorkers can’t be kicked out of their homes for not being able to pay rent during the pandemic.

“If you can’t pay your rent, you cannot be evicted right now,” he said.

As to the cause of the crime wave, Cuomo said: “There’s a number of contributing factors … There’s no one factor.”

But Ocasio-Cortez — who has joined progressives in calling on Cuomo to cancel rent in New York during the pandemic — had a spokeswoman grill the governor for failing to mention that his eviction moratorium expires next month.

“Tenants are currently receiving eviction notices because they are unable to pay months of back rent. In less than a month, families can be legally forced from their homes,” said the spokeswoman, Lauren Hitt.

Ocasio-Cortez first floated her theory about rent fears and crime during a virtual town hall event over the weekend.

“Maybe this has to do with the fact that people aren’t paying their rent and are scared to pay their rent and so they go out and they need to feed their child and they don’t have money so … they feel like they either need to shoplift some bread or go hungry,” she said.