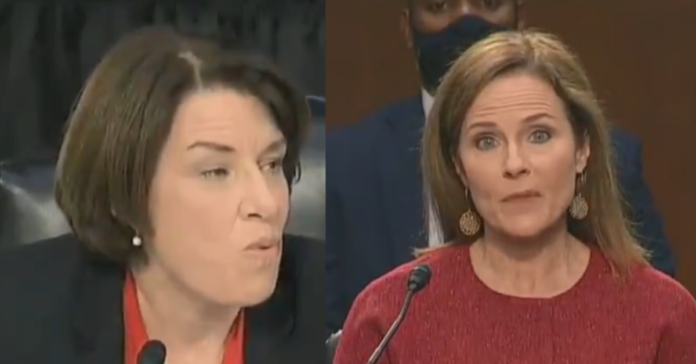 Amy Coney Barrett did an outstanding job taking all the incoming from the Dem Senators who tried to prosecute their case against Trump through her.

They never laid a glove on her as she calmly answered their questions with a clear grasp of the law and with sharp comebacks when called for.

Like did she did when she shut down failed presidential candidate Amy Klobuchar.

“Did you say that? That Roberts pushed the Affordable Care Act beyond its plausible meaning to save the statute?” Klobuchar asked.

“One thing I want to clarify is you said that I criticized Chief Justice Roberts,” Barrett said before landing the knockout blow:

“That was just designed to make a comment about his reasoning in that case — which, as I’ve said before, is consistent with the way the majority opinion characterized it as the less plausible reading of the statute,” Barrett said.

From The Western Journal:

Democratic Sens. Cory Booker of New Jersey and Kamala Harris of California, as well as 2020 Democratic presidential nominee Joe Biden, have all suggested that Barrett’s personal stance on the case of National Federation of Independent Business v. Sebelius is proof she would vote in favor of overturning the ruling and dissolving the ACA, if elevated to the Supreme Court.

These allegations stem largely from the existence of publicly available 2017 legal review published by Notre Dame Law School, in which Barrett argued the grounds upon which the Roberts court had ruled the ACA’s individual mandate constitutional were contrived.

“Roberts pushed the Affordable Care Act beyond its plausible meaning to save the statute,” Barrett wrote. “He construed the penalty imposed on those without health insurance as a tax, which permitted him to sustain the statute as a valid exercise of the taxing power; had he treated the payment as the statute did — as a penalty — he would have had to invalidate the statute as lying beyond Congress’s commerce power.”