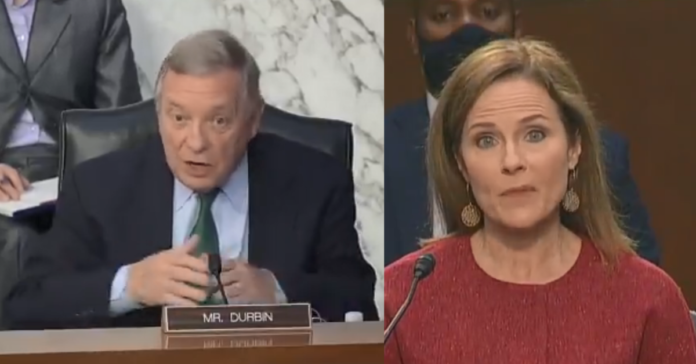 Amy Coney Barrett is doing a great job beating back nonsense questions from Dem Senators. So far, they have not attacked her like Kavanaugh but we still have time.

On Obamacare, she said: “There’s not precedent on issue that’s coming up before the court. It turns on a document called severability, which was not an issue in either of the two big Affordable Care Act cases,” she told Judiciary Committee Chairman Lindsey Graham (R-S.C.).

“If it is a penalty, can it just be cut out from the statute so that the rest of the statute including protection for pre-existing conditions stand,” she said.

As to whether she will recuse on Obamacare case Amy said,

“Justice [Ruth Bader] Ginsburg in explaining how recusal works said it’s always up to the individual justice but it always involves consultation with the colleagues, with the other eight justices so that’s not a question I could answer in the abstract,” she said.

But it was her answer to Sen Durbin from Illinois that won the day. In response to a question about George Floyd she said:

“Have you seen the George Floyd video?”

Durbin: “What impact did it have on you?”

ACB: “Senator, as you might imagine, given that I have two black children, that was very very personal for my family. We wept together in my room,.”

Durbin says it isn’t Democrats who have given the indication that Barrett is put on the court for political purposes — says “read the tweets.”

On voting rights, Barrett notes her past rulings that states have rights to curb voting rights from felons, but says that she has not said whether it is good to do so or not

Durbin contrasts that with opinions that you cannot deny someone gun rights because they are a felon.

Barret says felons can be denied a right to vote as it is a civic rights, and gun rights are an individual right.

Durbin says the notion is “hard to swallow” that voting rights can be limited but gun rights cannot.

“That was thinking in the 19th century that resulted in voter suppression.”

"Given that I have two black children, that was very, very personal for my family…" pic.twitter.com/Hnlak0lmlw