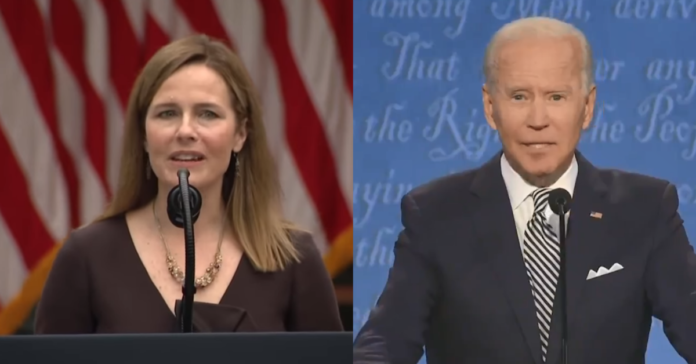 Amy Coney Barrett just handed Joe Biden and the Democrats a huge loss when word leaked that she will not commit to recusing should the election end up in the Supreme Court as the left is demanding.

“The underlying fault here is with the timing, which makes it a sham, but certainly she should recuse herself. In a normal world, there would be no question about it,” Sen. Richard Blumenthal (D-Conn.), said.

“There is no legal disqualification. She doesn’t have a legal conflict. She doesn’t decide the election. She’s just a vote like everybody else.” Lindsey Graham said. “That’s a ridiculous idea that she can’t hear election claims because she was nominated in an election year.”

President Donald Trump’s nominee to the Supreme Court did not commit to recusing herself from cases related to the outcome of the 2020 presidential election, according to her written responses to a Senate Judiciary Committee questionnaire.

Amy Coney Barrett’s responses, obtained by POLITICO on Tuesday night, also provide a window into the breakneck pace at which the White House operated in the aftermath of Justice Ruth Bader Ginsburg’s death, with Barrett revealing that Trump settled on her as his pick just three days after Ginsburg’s death.

Barrett’s statements on her standard for recusals are certain to draw fire from Democrats, who have been pressuring Barrett over the issue as Republicans dismiss their arguments as having no basis.

More broadly, Democrats have strongly objected to Senate Republicans’ effort to confirm a new Supreme Court justice this close to the election.

The 48-year-old nominee also said she would step aside from matters in which she participated while serving in her current role as a judge on the U.S. Court of Appeals for the 7th Circuit.

GOP Sen. Mike Braun says he doesn’t think Judge Amy Coney Barrett needs to recuse herself from election cases if she is confirmed to the Supreme Court. "She is so sharp in her opinions, has said up front that she will be a constitutionalist" https://t.co/GxfklQrXHT pic.twitter.com/hdNhtC36IV