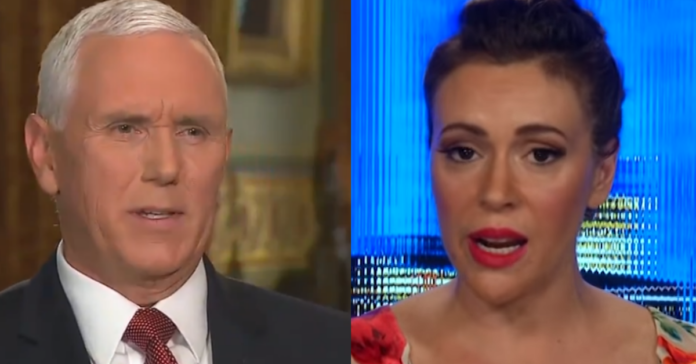 The problem for the left is how to whitewash their history to not be hypocrites when they attack the GOP.

To be fair, it is a problem for the GOP when they attack the left because politicians by their nature are hypocrites.

But that does not make the attacks less odious and uncalled for, nor is “both sides do it” a valid excuse for crossing the line.

Which is exactly what Alyssa Milano did when she compared Mike Pence to Heinrich Himmler.

Look, we have a problem at the border that will only get worse as poverty increases in Central America – we have to deal with it rationally, like adults, and find a bipartisan solution sooner rather than later.

Actress and liberal activist Alyssa Milano implied in a Saturday tweet that Vice President Mike Pence was on the same moral plane as the leading Nazi who orchestrated the Holocaust.

Milano juxtaposed a 1941 photo of Heinrich Himmler surveying a Soviet POW camp with a Friday photo of Pence inspecting the conditions of a U.S. migrant detention facility in McAllen, Texas. Milano offered no commentary other than a photo credit for the second picture.

Milano’s tweet continues the escalating rhetoric that Democratic New York Rep. Alexandria Ocasio-Cortez began last month, in which she compared the U.S. detention facilities to concentration camps. Her comparison drew bipartisan denunciation, as well as condemnation from the U.S. Holocaust Memorial Museum, which issued a statement critical of such comparisons in June.

“The United States Holocaust Memorial Museum unequivocally rejects efforts to create analogies between the Holocaust and other events, whether historical or contemporary. That position has repeatedly and unambiguously been made clear in the Museum’s official statement on the matter – a statement that is reiterated and reaffirmed now,” the museum said.

“The Museum further reiterates that a statement ascribed to a Museum staff historian regarding recent attempts to analogize the situation on the United States southern border to concentration camps in Europe during the 1930s and 1940s does not reflect the position of the Museum.”