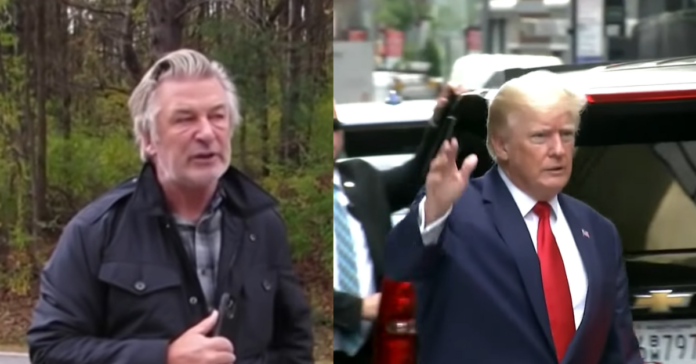 Hollywood hothead Alec Baldwin is getting desperate and is casting blame to try to get out from under his problems. He went on CNN and tried to deny any responsibility for the October 2021 shooting of cinematographer Hayna Hutchins.

He blamed Hutchins’ death on armorer Hannah Gutierrez Reed and assistant director Dave Halls and when that was falling flat he brought out the big guns and blamed Trump.

Speaking with CNN’s Chloe Melas, Baldwin said: “The former president of the United States said he probably shot her on purpose. To me that was really the only time that I needed — that I was worried about what was going to happen because here was Trump who instructed people to commit acts of violence and he was pointing the finger at me and saying I was responsible for the death.

“One thousand percent, I’m nervous that a bunch of people who were instructed by the former president to go to the Capitol — and they killed a law enforcement officer — and you don’t think that I think to myself, ‘Are some of those people gonna come and kill me?’”

“He pointed the gun, he still pointed the gun at this woman and it happened to go off and she wasn’t even an actor so it’s not like at a scene where it went on during a scene.

Attorneys for Gutierrez Reed and Halls were not buying it either.

“We disagree with Mr. Baldwin’s attempts to deflect blame onto others. It is not for him to decide or to apportion blame.”

“Halls is not responsible.

“Everyone needs to stop.

“People are only pointing the finger at Halls because they don’t want the responsibility of being wrong.

“Halls is a scapegoat. People need to look at the evidence.”

It's stupid to blame guns for the Alec Baldwin shooting.