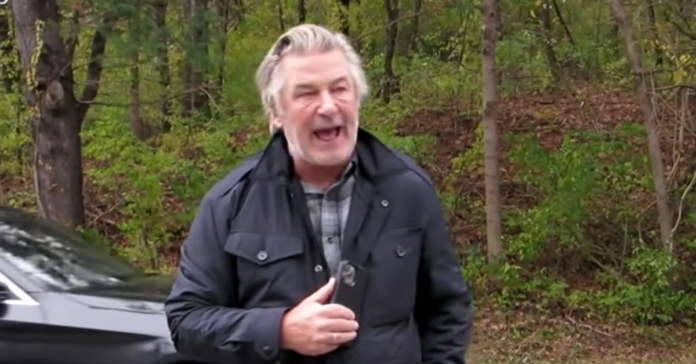 Alec Baldwin is whining about getting sued for shooting and killing cinematographer Halyna Hutchins and injuring director Joel Souza on the set for the movie ‘Rust” and sounds nervous about possible criminal charges.

Baldwin said he believes the lawsuits filed in the wake of the shooting have been directed at people who are considered “deep-pocket litigants,” not necessarily those who were negligent. The bad news for Baldwin is that he has deep pockets, was the shooter, and was a producer on the film. Three strikes and you are paying millions, Alec, if you don’t get hit with criminal charges first.

Alec said: “From the beginning, from the moment this happened, everybody has put out — besides all the anguish and the suffering, horrible feelings we have and, of course, there are two victims and nobody else is a victim, so to speak — we have dealt with a situation where specific people are not as interested in finding out what really happened.

“What you have is a certain group of litigants on whatever side, who their attitude is, well, the people who likely seem negligent have enough money.

“And the people who have money are not negligent, but we’re not gonna let that stop us from doing what we need to do in terms of litigation.

“Why sue people if you’re not going to get money? That’s what you’re doing.

“When someone whose job it is to ensure the safety of the weapon hands someone else whose job was to be the secondary layer of protection for safety and they hand it over to and you declare that that weapon is safe — that’s how I’ve lived my whole life.

“I’ve relied on the safety experts there to declare the gun is safe and hand me the gun.

“Never had a problem.

“The thing to remember is that guns are fired in films because that’s what audiences want.

“Maybe not this crowd.

“Maybe not a festival crowd where you want to watch something that’s a little more complicated.

“There’s a place to modify the safety regulations we have to deal with and I’m very much looking forward to our decisions.”

“I’m very hopeful when the facts come out we will not be held criminally responsible but it has changed my life.

“And I don’t mean this in the ordinary sense that I was involved in something or somebody passed.

“I mean, I was involved in a situation with somebody who was killed.

“It’s changed my life just in terms of the function of weapons in films and television,” he said.

Alec Baldwin hopeful 'we will not be held criminally responsible' for 'Rust' shooting https://t.co/IMW64ySccL pic.twitter.com/di62tpZo5D

Alec: “IT’S NOT MY FAULT THAT I POINTED MY WEAPON AT MY CREW AND DROPPED THE HAMMER ON THAT BULLET! STOP SUING ME!!!”https://t.co/qublZWhXyb