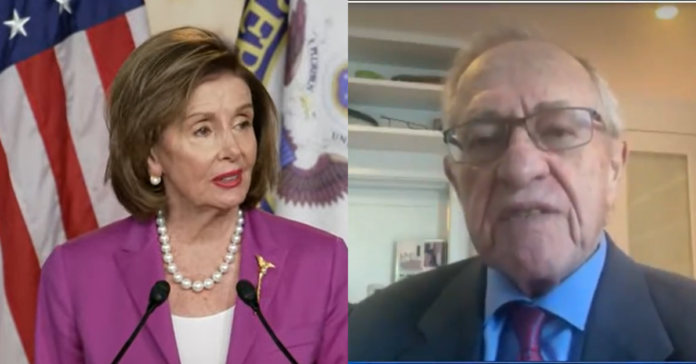 Harvard Law School professor emeritus Alan Dershowitz predicted Nancy Pelosi’s hearings regarding Jan 6 will fail because they for ‘partisan advantage’ in a blow to the Speaker.

“He will be called to testify; he’ll invoke executive privilege, perhaps,” Dershowitz said of Trump. “Perhaps he’ll want to testify. The American public does have a right to know what happened.”

Alan continued: “The key is individual responsibility. This is something that happened collectively, but every individual person must be held accountable for what they did and didn’t do — the president included.”

“You can’t judge this thing collectively, and so I think the focus has to be on a particular people. What did they do? And we have to know the facts.”

Alan said that he is representing a Washington student “who went into the Capitol not to obstruct justice, but simply to defend the senators who were calling for hearings.”

“In Washington today, it’s impossible to do anything without trying to get some partisan advantage, and that’s why I think this hearing will fail,” Dershowitz said.

“Everybody is interested in advancing their partisan interests. Unfortunately, that is the case,” Dershowitz said.

“The American people are entitled to know what actually happened, the actual truth. We’re not going to learn it from partisan investigations,” he added.

House Speaker Nancy Pelosi's partisan Jan. 6 Select Committee is not going to get to the truth, according to legal expert Alan Dershowitz on Newsmax, who added former President Donald Trump will be called to testify and would be unlikely to do so. https://t.co/X5g6JtEKC4