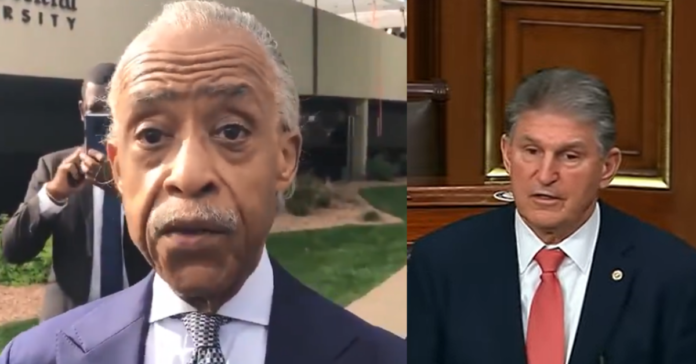 MSNBC host and notorious showboat Al Sharpton just crossed the line and showed the world again why the Democrats are terrible at politics. Sharpton actually threatened Joe Manchin – and if you are unaware the only reason Biden and Pelosi can do anything at all is that Manchin won in a deep red state.

Without Manchin Mitch McConnell is in control. Many in the GOP have been lobbying hard to get Manchin to switch and if Sharpton is going to give him the Tawana Brawley treatment why would he stay and take it?

Sharpton gave an interview where he threatened to accuse Sens. Joe Manchin of West Virginia and Kyrsten Sinema of Arizona of “supporting racism” over their support for keeping the Senate filibuster.

“The pressure that we are going to put on Sinema and Manchin is calling the filibuster racist and saying that they are, in effect, supporting racism,” Sharpton said. “Why would they be wedded to something that has those results? Their voters need to know that.”

“Many of us, and certainly all of us in the civil rights leadership, are committed to policies and laws and causes, not to people’s political careers. We’re not into that. We want to change the country,” Sharpton said. “And if there is not feasible evidence that we’re doing that, it is not in our concern to be aggressively involved.”

Look, Sharpton has been around a long time and his supporters will say he is using his power here while his critics will call him an extortionist but both are missing the point.

What voters in West Virginia support Al Sharpton? This empty threat make get him the headlines and more donations ut it risks ruining what little chance Biden has of getting what he wants done.

Though Manchin has previously dismissed a filibuster carve-out for voting rights on grounds that it’s like “being a little bit pregnant,” activists hope it can win over Democratic senators who are uneasy with entirely blowing up the Senate rules.

“I fundamentally believe that Congress alone has the ability to create a unified threshold for democracy in our country,” Georgia Democrat Stacey Abrams said in an interview. “I believe there needs to be a carve-out, an exemption, a suspension of the filibuster.”

Abrams and others argued that the current exemptions to the filibuster — from Supreme Court nominations to the use of budget reconciliation — and efforts of Republican state legislators to introduce restrictive voting laws opens the door for a voting rights exemption as well. “This is not new,” she said. “I believe that there is both exigency and there is a precedent for creating this [filibuster] carve-out in order to protect democracy.”

The same urgency expressed by those in the activist world has, in recent weeks, been picked up by prominent Black Democratic elected officials. Raphael Warnock of Georgia, one of two Black Democratic senators, devoted his maiden floor speech last week to talking about voting rights and said a “Senate rule” should not stand in the way of them. He also raised the issue of the filibuster with President Joe Biden on a call with Senate Democrats Monday evening.

Democratic Rep. Terri Sewell of Alabama, the lead sponsor of the John Lewis Voting Rights Act, said at a briefing hosted by the Southern Poverty Law Center last week that Democrats need to be “prepared to maybe do away with the filibuster” to pass it in the Senate.

Former President Barack Obama also called for the filibuster to be scrapped when eulogizing Lewis last year, decrying it as a “Jim Crow relic” that stood in the way of protecting voters.

“He speaks with a powerful voice,” Abrams said of Obama. “And when he was able to call out and emphasize its importance at the funeral of our nation’s strongest defender of voting rights, I believe he should be heard.”

Manchin’s letter is out. He praised much of HR1, but calls for a bipartisan approach to build credibility on changes.

“We can and we must reform our federal elections together – not as Democrats and Republicans, but as Americans to restore the faith and trust in our democracy.”