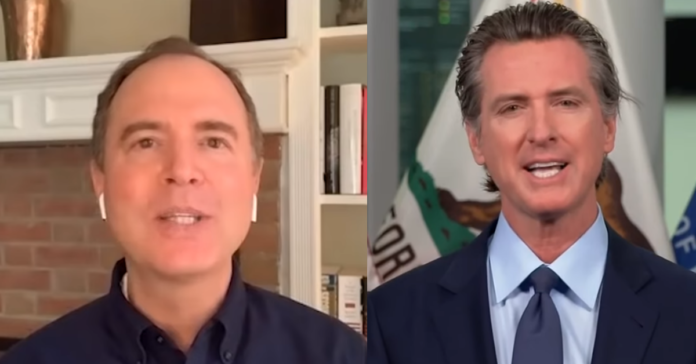 Adam Schiff may be leaving Congress and going back to California full time as he seeks to boost his profile in the state should he make a move for Dianne Feinstein’s Senate seat.

According to multiple media reports Pelosi, despite having a slim House margin and at least six months before a special election can replace Schiff, has given the move her blessing.

If Newsom selects Schiff, chair of the House Intelligence Committee and a confidant of Speaker Nancy Pelosi, House Democrats would lose a powerful party voice in the U.S. House and temporarily give up a seat in their slim 221-211 majority.

Nonetheless, Pelosi has given her approval to Schiff’s bid, a clear sign she thinks she can manage without him. according to people familiar with the matter. Spokespersons for Schiff and Pelosi declined comment.

The attorney general’s job also would better position Schiff, a high-profile Democrat who led the Russia investigation into then-President Trump, to run for Sen. Dianne Feinstein’s seat, should the 87-year-old decide not to run for reelection in 2024.

The AG’s job is being vacated by Xavier Becerra, who President Biden has nominated to serve as secretary of Health and Human Services.

The state AG post would move Schiff off the national stage but still offer him a highly visible platform. His public presence has noticeably lessened in recent months following the conclusion of the Russia investigation and first impeachment trial of then President Donald Trump, during which Schiff served as an impeachment manager.

Schiff is also a powerhouse fundraiser, which has led Democratic lawmakers and aides to speculate about his higher ambitions for office. He has often been mentioned as a potential candidate for House speaker when Pelosi leaves, or as a California senator when a vacancy opens up. Newsom appointed Alex Padilla last month to fill Vice President Kamala Harris’ senate seat.

If successful, Schiff would only be the latest of Pelosi’s allies who has found a comfortable landing spot in the state AG’s office after hitting a ceiling in House leadership. Becerra, the outgoing California attorney general, was appointed to the job in 2016 after term-limiting out of his job as House Democratic Caucus chairman.

Adam Schiff emerges in private jockeying to be California’s next Attorney General, with the backing of Nancy Pelosi w/ ⁦@NatashaBertrand⁩ ⁦@heatherscope⁩ https://t.co/ldyqlh4CPr