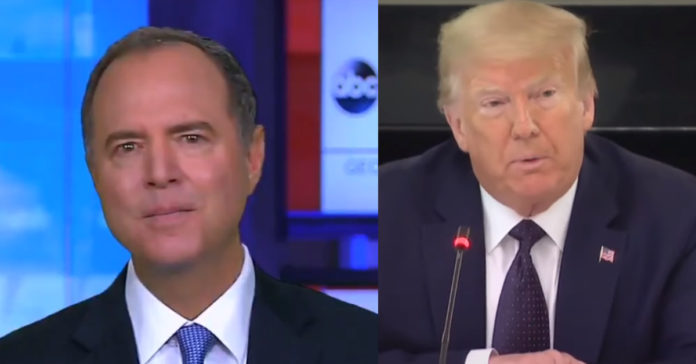 The House Intel released a statement that said: “Today, Rep. Adam Schiff (D-CA), Chairman of the House Permanent Select Committee on Intelligence, sent a letter to Department of Homeland Security (DHS) Acting Secretary Chad Wolf and Office of Intelligence and Analysis (I&A) Acting Undersecretary Horace Jen announcing an investigation into I&A’s expanded intelligence activities, including its actions in Portland and involvement in the Administration’s response to protests nationwide.

This investigation comes on the heels of a letter two weeks ago by Schiff requesting information about reports I&A may be engaging in unprecedented, “expanded” intelligence and related activities, in support of a policy that exceeds the Department’s historical mission, and is contrary to constitutionally-protected rights of speech, assembly, and peaceful protest. Since then, I&A has provided some documents and briefings, which, along with additional news reports, have only raised the Committee’s alarm.

In the letter, Schiff writes:

“Let me be clear: the reporting regarding the monitoring of peaceful protesters, creating and disseminating intelligence reports about journalists and protesters, and potential exploitation of electronic devices is deeply troubling.

“The revelations thus far require a full accounting, and, if substantiated, must never be allowed to occur again. The Committee is therefore initiating, pursuant to its unique oversight and legislative authority, an investigation of I&A’s activities in Portland and in support of the Department’s response to protests nationwide.”

There have been additional reports that I&A and DHS officials engaged in intelligence collection and reporting on journalists and non-violent protestors, sought to change the content of intelligence reports, disseminated as intelligence a conversation conducted among Portland protesters using an encrypted messaging application, and limited the role of I&A officials charged with ensuring the office’s adherence to civil liberties and privacy rules.

The Committee is requesting a number of DHS I&A officials be made available for transcribed interviews, including Former Acting Under Secretary for Intelligence and Analysis Brian Murphy, Deputy Under Secretary for Intelligence Enterprise Operations Horace Jen, and other officials involved in the activities. The Committee is also requesting additional intelligence reports, reports referenced in media articles, and I&A policies and guidance. As stated in the letter, if the Department does not provide the information and persons requested, the Committee will consider “all options necessary to obtain compliance—including compulsory process.”

Since its July 22, 2020 letter requesting documents, the House Permanent Select Committee on Intelligence (the “Committee”) has learned more about actions undertaken by Department of Homeland Security (“DHS” or the “Department”) personnel in Portland, Oregon and elsewhere, including personnel with DHS’ Office of Intelligence and Analysis (“I&A”), an element of the U.S. Intelligence Community.

Let me be clear: reporting regarding the monitoring of peaceful protesters, creating and disseminating intelligence reports about journalists and protesters, and potential exploitation of electronic devices is deeply troubling.

The revelations require a full accounting, and, if substantiated, must never be allowed to occur again. The Committee is therefore initiating, pursuant to its unique oversight and legislative authority, an investigation of I&A’s activities in Portland and in support of the Department’s response to protests nationwide.

According to press reports, I&A engaged in intelligence collection and reporting on journalists[1] and non-violent protestors.[2] Recently reassigned Acting Under Secretary for Intelligence and Analysis Brian Murphy sought on July 25, 2020 to change the content of intelligence reports by directing that all references to “VIOLENT OPPORTUNISTS” be replaced with “VIOLENT ANTIFA ANARCHISTS INSPIRED.”[3] I&A also disseminated as intelligence a conversation that was conducted among Portland protesters using an encrypted messaging application, even though it did not “show the protesters planning to harass or target police or damage property.”[4] Moreover, a recent report suggests that Ken Cuccinelli, the senior official performing the duties of the Deputy Secretary, limited the role of I&A officials charged with ensuring the office’s adherence to civil liberties and privacy rules at the request of I&A senior leadership.[5]

The Committee’s recent oversight engagements with I&A have only heightened our alarm. The Committee is concerned that then-Under Secretary Murphy provided incomplete and potentially misleading information to Committee staff regarding I&A’s activities in Portland, including the actions of its personnel in the city, and I&A’s intelligence collection, analysis, and dissemination efforts related to Portland and other protests nationwide.

I&A’s legal justification for its “expanded” domestic intelligence activities is also unpersuasive. I&A’s intelligence mission is important, but purposefully limited. Yet, under an aggressive and novel legal interpretation, I&A appears to believe that it can collect and disseminate intelligence regarding a wide range of “threats” to damage or destroy public monuments, memorials, and statues—no matter how minor—in addition to other federal property, and that even isolated incidents of defacement and vandalism of such objects, when viewed in conjunction with other such events elsewhere in the country, could constitute a threat significant enough to justify I&A’s intelligence activities. The implications of this reinterpretation of I&A’s authorities are chilling and inconsistent with constitutional and other legal protections Americans deserve and expect.

I&A’s activities have not occurred in a vacuum.  In recent weeks, DHS has engaged in aggressive operations, some going well beyond the Department’s traditional missions.  According to press reporting, DHS officers deployed to Portland over the objections of state and local officials.[6],[7]  Such officers then apparently used unmarked vehicles to – in Acting Secretary Wolf’s words, “proactively arrest individuals” to protect federal facilities[8] – which seems to have included the arrest or detention of Americans participating in protests, without probable cause and potentially violating such persons’ constitutional rights.[9]  When asked at a news conference about these arrests, Kris Kline, Deputy Director of the Federal Protective Service, appeared not to know what level of detention amounted to a constitutional arrest.[10] These developments in Portland raise questions about the activities, responsibilities, and conduct of I&A personnel present in the city, including any involvement they may have had in the activities of other DHS components on the ground, such as detentions, interviews, or debriefings of any kind.

In response to the Committee’s July 22, 2020 letter and its subsequent requests, I&A was initially cooperative, providing a partial set of the requested documents and making officials available to the Committee for briefings. Cooperation has since decreased significantly and the provision of materials has paused, as public revelations and scrutiny have increased and the Department has announced internal reviews.

Public scrutiny, ongoing executive branch reviews, or other investigations cannot serve as a proper basis for pausing oversight by the Committee, or for delaying or withholding the timely provision of information or personnel the Committee has requested in order to carry out its authorized responsibilities.

Therefore, the Committee respectfully requests that you:

(a) all of the remaining documents requested in the Committee’s July 22, 2020 letter;

(d) policies and guidance including or related to: custodial debriefings or interviews (including any policies or guidance issued in connection with I&A’s activities in Portland); open source collection; drafting, review, and dissemination of FIRS, IIRs, OSIRs, and FINTEL; intelligence requirements and essential elements of information (“EEIs”); standing information needs; analytic lexicon and terminology and usage; analytic tradecraft standards and their implementation; and

Make the following officials available for transcribed interviews during the month of August:

(a) Former Acting Under Secretary for Intelligence and Analysis Brian Murphy;

(c) Chief of Staff to the Under Secretary for Intelligence and Analysis;

(f) Director of the Current and Emerging Threats Center (CETC);

(i) The Regional Director or other I&A officer principally responsible for I&A activities with respect to DHS operations in Portland.