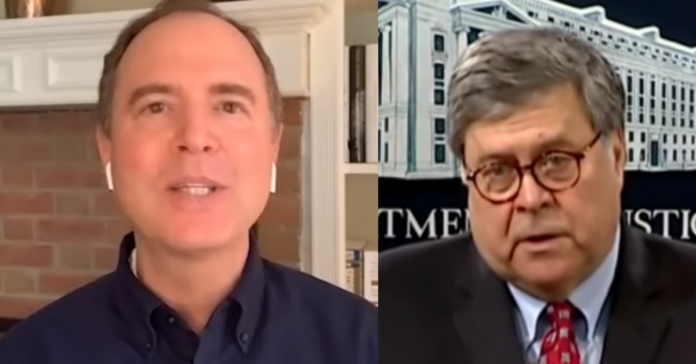 House Intelligence Committee Chairman Adam Schiff (D-Calif.) knows how to play the game behind the scenes in D.C.

He or the people he directs are rumored to be the biggest leakers in Washington. And they are good at it too, don’t be fooled by Adam’s incompetence in other areas.

The leaks about some of Kushner and Don Jr’s Russian meetings painted such a nasty and sinister picture of what went on and the media had to eat it up.

It was only later when the full transcripts were released did we learn how Schiff or whoever left out the rest of the story – the part that showed it was innocent nonsense.

Now Adam is coming to the front of the camera and accusing Bill Barr of lying in a disgraceful display.

On Sunday accused Attorney General William Barr of lying when he said China posed the greatest threat to U.S. elections this year.

“That’s just a plain false statement by the attorney general, a flat-out false statement,” Schiff said in an interview with CNN. “What Bill Barr just did in that statement was just flat-out mislead the American people.”

The comments from Schiff came just days after Barr was asked about U.S. intelligence noting that Russia, China and Iran are seeking to interfere in the 2020 elections. Asked whose meddling efforts were the most aggressive, Barr said the intelligence he’d seen showed it was China. However, he said he could not divulge details regarding that conclusion.

Schiff rejected Barr’s remarks, saying it was “such a disservice to the country that we can’t trust our own attorney general.”

“But apparently Bill Barr is willing to do anything or say anything to help Donald Trump,” he said.

Asked whether he was accusing Barr of lying, the California congressman said that is “basically what he’s doing.”

“I hesitate to say that, but that is the reality,” he said, pointing to statements from a top U.S. intelligence official about the differences between Russia and China’s interference efforts.