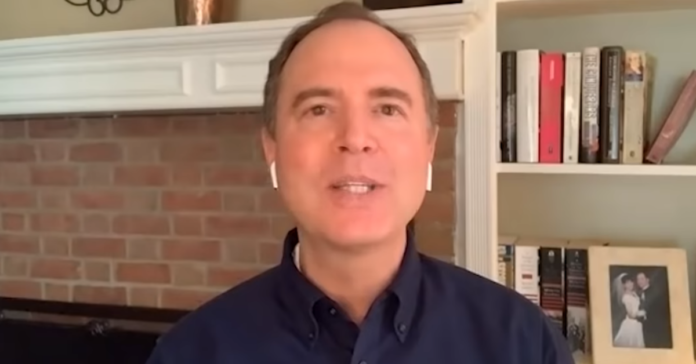 Congressman Adam Schiff just got some very bad news. He is being accused of purposely undermining the online privacy of U.S. citizens.

Civil liberty groups sent a letter to Pelosi and other government leaders detailing the accusation and even hint at possible criminality about concealing the unlawful surveillance of Americans’ web browsing activity.

In a letter, the groups say the “alarming statements and actions” by Schiff and Richard Burr have caused concern over a suspected “unauthorized dragnet surveillance of people in the United States.”

“Throughout the 2020 debate in Congress about whether and how to reauthorize these authorities, activity by the House and Senate intelligence committees has spurred critical questions as to what surveillance of people in the United States occurred under Section 215 [of the Patriot Act] and may still be occurring despite the sunset of these authorities, on the basis of secret claims of inherent executive power or through the misuse of other authorities,” the letter reads.

“However, the interpretation Chairman Schiff gave to the Times suggests the government may have secretly contorted the law to justify dragnet surveillance of the internet activity of people in the United States, regardless of their United States personhood.

Without a clear answer as to whether the government treats domestic information this way, Congress and the public can have no confidence that Chairman Schiff’s amended language would, in fact, protect United States persons from dragnet surveillance of online activity.

It would, for instance, be consistent with Schiff’s understanding of the House amendment language if the agencies do not interpret an IP address or other identifier that indicates presence within the United States to be inherently indicative of the United States personhood of the user associated with said identifier — even if the user is in fact a citizen or long-term permanent resident. If there is an operational opinion from the Foreign Intelligence Surveillance Court, Office of Legal Counsel, or other entity that permits domestic identifiers to be treated as presumptively foreign or as presumptively not belonging to a United States person, it is unlikely any members of Congress outside of the intelligence committees would know, or even have reliable access to, that information.

Treating domestic information and identifiers as presumptively foreign or as presumptively not belonging to a United States person would obliterate critical protections carefully negotiated by Congress to protect Americans.

It would also — once again — embody a reprehensible abuse of the government’s surveillance powers. Such a legal theory may not be limited to Section 215, but could touch on all of FISA. It could further invite the domestic deployment of the President’s inestimable foreign surveillance tools, pursuant to Executive Order 12333 or otherwise.

This would be consistent with former Chairman Burr’s claim. It would also be consistent with Attorney General Barr’s long-held views of executive power. It is possible that a counterintuitive legal interpretation or abuse of authorities other than that outlined above might account for the language difference between the Daines-Wyden amendment and the House version (as altered and interpreted by Chairman Schiff) being tantamount to the difference between banning and allowing dragnet surveillance of people in the United States. Whatever the answer, this must be clarified prior to any new or continued surveillance authorization.

As Senators Leahy and Lee’s letter explains, misuse of Section 215’s sunset carveout, secret claims of inherent executive power, and replication under other authorities could be misused to continue this surveillance in secret.

We urge you to join us in defending your constituents’ right to privacy, as well as Congress’s Constitutionally mandated role overseeing federal agencies’ activity, by calling for a public explanation of what surveillance the federal government considers legal and on what authorities it relies to conduct it.”