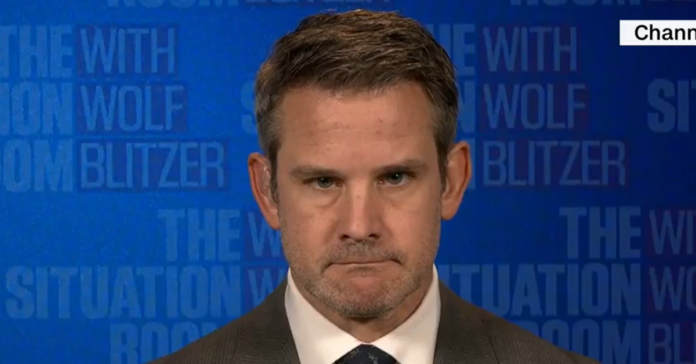 Representative Adam Kinzinger (R-IL) went on CNN and rattled his saber calling for President Joe Biden to take an extraordinary step and escalate the Ukraine conflict in an irresponsible manner.

Ukraine is winning. For now. If Russia is able to take out Ukraine’s army it appears it will still face a well-armed resistance pledged to go down the hard way. Nevertheless, Adam wants to escalate and said Friday on CNN’s The Situation Room that “we should declare Ukraine a no-fly zone enforced by NATO and the United States.”

This would put our forces in direct conflict with Russia’s forces. This situation is too dangerous to add that to the mix. He must be out of his mind to even suggest it.

Kinzinger said, “The Ukrainian people are fighting much harder than I think Putin expected. But they will be outmatched and outgunned ultimately by somebody that is very willing to lose his own troops, and he doesn’t care, Vladimir Putin.

“I think this is time where we need to, at the invitation of Ukraine, declare Ukraine a no-fly zone enforced by NATO and the United States.

1) The fate of #Ukraine is being decided tonight, but also the fate of the west. Declare a #NoFlyZone over Ukraine at the invitation of their sovereign govt. Disrupt Russias air ops to give the heroic Ukrainians a fair fight. It’s now, or later.

“We certainly have the capability to do that.

“The air space is still contested by the Ukrainians. We can shut down Russian air operations, even if we don’t directly engage Russian troops on the ground.

“Vladimir Putin has threatened the use of nuclear weapons.

“That shows you how dangerous this man is. And he only stops when his bayonet hits a brick wall.

“The United States and NATO must be that brick wall tonight.

“I would love to see us declare at the invitation of Ukraine that Ukraine is a no-fly zone, and we will enforce that.

“I’ve got to tell you, for anybody that thinks that somehow we’re going to be equally matched with Russia, NATO, and the United States would crush Russia in the air in a second. We have to remember how good we are at that.

“That can be the thing that can give the Ukrainians a fighting ability to prevent the occupation of Kyiv, but they won’t go quietly into the night,” he said.

2) History teaches that taking a stand is inevitable and gets more costly with time. We own the skies, Russia cannot hold a candle to our Air power. Do this. Putin is too dangerous to hope he is satisfied with “just Ukraine.”

A year from now, Kinzinger will just be another former congressman lobbying for China. https://t.co/EKtGhv5W6W