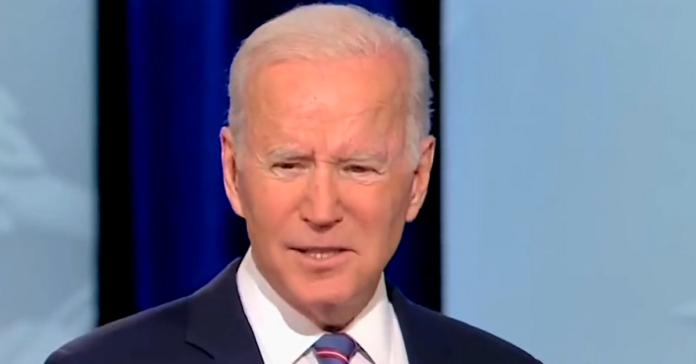 The administration has been eerily silent since the news broke and they have been getting hammered by it. Biden denied the charges and said it was a garbage report (the Wall Street Journal broke the news) Biden told Doocy, “If you guys keep sending that garbage out, yeah, but it’s not true.”

Doocy asked Biden, “So this is a garbage report?” “Yeah. That’s not going to happen,” Biden said. Enter the ACLU, an organization helping with the lawsuits by the migrants. They said the proposal was real and on the table and ripped Biden for not being aware of the ‘actions of his very own Justice Department.’

The ACLU issued a press release that said:

In response to a question posed to President Biden about family separation lawsuits brought by the American Civil Liberties Union and other lawyers, the president said a $450,000 settlement amount per child “is not going to happen.”

“President Biden may not have been fully briefed about the actions of his very own Justice Department as it carefully deliberated and considered the crimes committed against thousands of families separated from their children as an intentional governmental policy.

“But if he follows through on what he said, the president is abandoning a core campaign promise to do justice for the thousands of separated families.

“We respectfully remind President Biden that he called these actions ‘criminal’ in a debate with then-President Trump, and campaigned on remedying and rectifying the lawlessness of the Trump administration.

“We call on President Biden to right the wrongs of this national tragedy,” the statement said.

A source familiar with the matter told CNN last week that migrant families who were forcibly separated at the US-Mexico border under the policy could receive hundreds of thousands dollars in compensation as part of settlement negotiations between the Justice Department and the families’ lawyers.

More than 3,000 children were separated from their families at the US-Mexico border under former President Donald Trump. It’s unclear how many people would be eligible for payments.

Negotiations are ongoing and it’s unknown what the final figure will be, the source familiar with the matter told CNN at the time, noting that different numbers have been discussed at various times. Financial compensation would likely vary and not all would get the maximum agreed-upon amount.

The Wall Street Journal first reported that the federal government was considering payments of $450,000 per individual affected by the policy. The American Civil Liberties Union filed a class action lawsuit in 2019 seeking damages for the toll the separations took on families, and attorneys representing families have filed separate claims.

This ACLU statement is quite something https://t.co/g68hPTcqkR