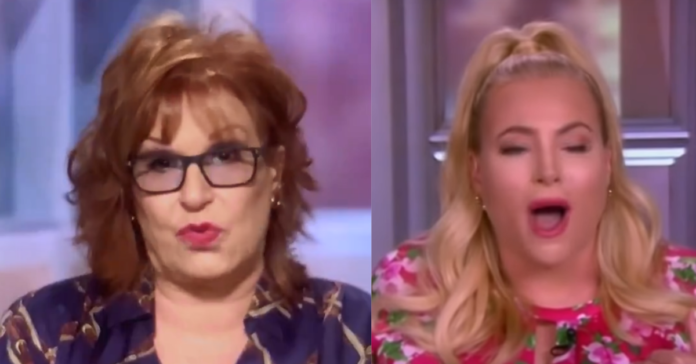 ABC News President Kim Godwin had to step in over at The View warning Joy Behar, Meghan McCain, and the rest of the gang that they are turning toxic to viewers. The co-hosts have been feuding almost non-stop and in a very obnoxious manner.

Godwin had a meeting with producers and talent after another dustup that caused outrage among viewers. This was just one of the examples that viewers do not like. Joy said to Megan, “I resent that remark.” “Well, I resent a lot of things,” McCain said. “So, we’re even.”

“I mean, I’ve been talking about anti-Semitism on this show for 25 freaking years,” Behar whined. “Don’t tell me what I’m supposed to be saying, Meghan, okay? You do your thing, we do ours.”

“I’m not telling you what you’re supposed to say. I’m well aware we do separate things on this show, Joy, okay?” McCain said. “And I know you’ve been here 25 years and I’ve been here four.”

“Nobody wants anybody arguing,” Whoopi said. “We would like everybody to stop comparing stuff or conflating stuff or saying stupid stuff, whether you’re on the left or the right or in the center.”

ABC News President Kim Godwin called a last-minute meeting with ‘View’ talent and producers, trying to improve the culture behind the scenes at the show.

We’re told ABC was getting flooded with pleas to fire Meghan over her latest tantrum and attacks on Joy, and that’s what sparked the virtual meeting.

Our sources say Godwin — who just took the helm at ABC earlier this month — told everyone things are getting too personal on TV lately, not with the issues they’re debating … but with the attacks between co-hosts.

Godwin told everyone it’s coming off as toxic to the audience, and it’s not the direction she wants for the show.

Meghan and Whoopi also got into it.

“I would love if the energy that is being put on one crazy woman in Congress — and by the way, if she is the face of the Republicans, then the Squad is the face of the Democrats — I would love Democrats to put that same type of energy onto what’s happening on the left, because quite frankly, this is how people get red-pilled,” said McCain said before adding, “Anti-Semitism is a huge problem everywhere in this country.”