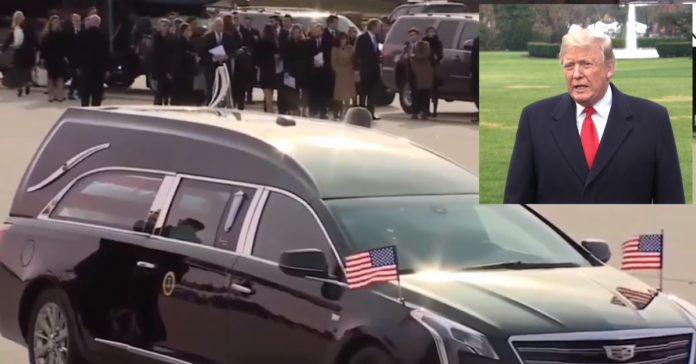 ABC News should lose the news in its name and instead replace it with two words: scandalous gossip. ABC scandalous Trump bashing gossip would be even better.

We all know Trump gets ratings but it is getting ridiculous. Every story has to either be about Trump or have some Trump angle to it or it simply does not see the light of day.

The truth? Who cares if it sells. Nonsense palace intrigue masquerading as well placed hit pieces from the enemies of Trump? Run those twice.

But this is hard to ignore…From The Daily Wire:

ABC News’ Terry Moran mocked President Donald Trump as he fantasized about his death on Wednesday during a livestream of President George H. W. Bush’s funeral.

“Probably a different tone in that funeral,” Moran said, speaking of Trump’s future funeral. “First, he’s going to choreograph it, so there might be more trumpets and fanfare.”

“Yes, he would do it bigger, one would imagine,” ABC correspondent Devin Dwyer added.

“It will be the best presidential funeral ever,” Moran said. “No one will ever have seen anything like that funeral.”

“To mock him during the coverage of the president’s funeral is just despicable garbage,” Gainor continued. “I would say ABC News should apologize, but it wouldn’t be sincere if it did.

This is about the billionth example of unprofessional journalism in their attacks on Trump. It’s only more outrageous because of the solemn occasion.”

ABC News’ Terry Moran mockingly fantasizes about Trump's funeral: "First, he’s going to choreograph it. So, there might be more trumpets and fanfare. … It will be the best presidential funeral ever. No one will ever have seen anything like that funeral." pic.twitter.com/Sjt8pm5m9f